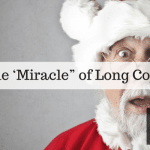 Over the holidays, I was watching one particular Santa-based movie with my family which delivered a powerful lesson about story and reveals what we need to make the sale.

So before Christmas becomes a dim and distant memory, let me share it with you.

Usually, when you think of Santa Claus stories, you might think of flights of fancy like Polar Express, Elf, or The Santa Clause.

These are fun, no question.

But one of my favorite Santa films doesn’t showcase flying reindeer or a fat man who can squeeze down chimneys.

There’s no magic in this story. No fantasy …

Plot justification are those scenes that pave the way for the fun that follows. It’s how the story stacks event after event to justify later events, especially the “climax” of the story.

This is the storytelling equivalent of pouring a foundation for a house. Such storytelling concrete may not look sexy; but without it, the flashy parts of the plot – the climactic moments – collapse into dust.

(I talked about using plot justification to justify “twists” in this post.)

Plot justification is also important in sales messages. Just as stories build to a climax, copy builds to a sale. It builds by pouring a “reason why” foundation.

So let’s take a peek at how this classic Christmas tale builds the foundation for the “sale”:

The climactic moment when we believe – in a way – that Santa Claus is real.

The movie is Miracle on 34th Street, featuring a young Natalie Wood as the little girl Susan. Susan was raised by her mother Doris to accept only the facts. No flights of fancy. No imaginative play.

But then into their lives comes Kris Kringle. Kris, a kindly old man with a snow-white beard, is spotted by Doris at the Macy’s Thanksgiving parade.

Doris, a Macy employee, organizes the parade and discovers that her actor playing Santa Claus is stumble-blind drunk.

Just then, Kris walks by and Doris ropes him in for the part. He nails it, and Doris hires him on as Macy’s department store Santa.

But we soon learn Kris believes he really is Santa Claus. He tries to win the belief of Doris and young Susan. He’s aided by Fred, a neighbor of Doris who becomes her boyfriend. But the two logical ladies resist.

Then, events careen to a climax in a courtroom sequence where Kris is put on trial for insanity. Fred, a lawyer, defends him.

Can he prove that Kris is really Santa Claus, and so keep him out of the loony bin?

Well, let me cut to the chase and spoil the ending: the judge rules that Kris is Santa.

Are we the audience really supposed to believe this?

After all, I told you there’s no magic here. Kris doesn’t suddenly open a bag filled with tailor-made gifts for everyone. (As happens in Tim Allen’s The Santa Clause 2.)

But we do believe. And that’s because the storytellers already poured the logical foundation that clinches this “sale.”

First, the emotional “stakes” are raised, which invests us in the action and makes us care about it.

The Prosecutor feels the heat from his son, who believes in Santa Clause and thinks that Kris is the real deal. The poor guy also feels the pressure from his wife, who warns her husband not to break their son’s heart.

The Judge is also feeling the heat. He’s up for re-election. And if he declares Kris insane, he can kiss his gavel good-bye. So says his crusty campaign manager. (The Judge also has a pair of grandkids who aren’t speaking to him.)

And, of course, Susan follows the trial. She is just starting to believe in Kris. Her mother Doris is torn. She sees her daughter coming to life, and she cares for Kris too. If Kris is declared insane, it could break Susan’s tender young heart. A lot’s at stake.

Second, we get a little glimpse of a real justification for why can believe, when Mr. Macy himself is put on the stand.

Mr. Macy is called to testify: does he believe Kris is Santa Claus?

The filmmakers show the images in Macy’s mind as he struggles to answer:

If he says no, we can see the headlines: “Macy’s Santa a nutcase, sales plummet.”

Macy thinks again. This time we see Macy’s memory of the children when they came to see Kris. We see the look of pure joy on their faces. The way Kris made each of them feel special and loved. The way he told their mothers how to find the children’s most cherished gift. Even if it meant shopping at another store.

So now Macy can answer the Prosecutor truthfully, “Yes he is.”

Finally, we see the last link in logic: the letter.

Kris’s salvation comes from a letter. Actually, an avalanche of letters.

The New York City Post Office marches into the courtroom and delivers hundreds of letters on the Judge’s bench. These are “dead letters”, missives mailed to Santa Claus over the years, with nowhere to go. But now they have a destination: the courthouse.

And this is the “proof” that Fred needs to confirm Kris is Santa: The U.S. Post Office – an official, government body –  declares Kris to be Santa by the act of delivering letters to him. The Judge can now rule in favor of Kris’s sanity with full “CYA” justification.

But wait – how did the post office know where to deliver the letters? Isn’t this “cheating” by the storytellers? A so-called “Deus Ex Machina”?

No, because the storytellers laid the groundwork for that too. They poured that foundation in an earlier scene in the bowels of the New York post office.

We saw a letter sorter spot an envelope addressed to Santa. He’s seen plenty of those in his time. But this one is different. It actually has an address!

Where? The courthouse. The letter’s sender? Young Susan, who has finally come to believe that Kris is Santa, and wants him to know it. She knows exactly where to send the letter; her mother attends the trial every day.

And this gives the postal workers the idea to off-load all those letters to Santa that have piled up over the years.

So when Kris finally wins the case, it doesn’t feel like an empty victory.

The emotional stakes are real on all sides. From the ‘antagonists’ (the DA and the Judge) to the protagonists: Kris, who can lose his freedom. And lawyer Fred, who could lose his career if he fails.

Plus, we see the logic in miniature when Mr. Macy testifies. He gives us a legitimate reason to believe.

Finally, we the logic of the letter, which seals the last layer on the foundation.

Emotion and Logic. Just like in a good sales letter.

Yes, when you include all these extra pieces of justification in your copy, you write a longer sales message. A longer message that can turn some folks away.

But all those plot pieces are necessary for the right prospect. Those pieces answer objections. They provide credibility. They deepen the emotional stakes.

So that when the prospect sees the offer, they find it believable and compelling.

The Moral: Tell all the pieces of the sales message to justify the sale, just how a story justifies its climactic moment.

Ep 83: Building your authority as a freelancer (even if you’re new-ish) with Melanie Warren 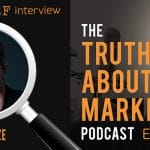 Ep 143: Tom Breeze – How To Capture YouTube Viewers Before They “Skip” Your Ad