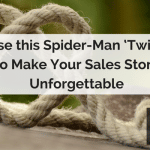 There’s one story principle that’s tough to execute, but very valuable if you do it right.

This principle gives a story added depth. What does that mean? Simply, the tale penetrates deeper into the audience. The story stays with them, echoes in their minds in the days after they first see it. Instead of dissolving away like so much noise.

In fact, this story principle is so important, Aristotle himself, in his book The Poetics, singles it out as a key criterion for making the finest type of story.

What is this story principle?

Aristotle called it “Discovery.” We can call it “The Twist.”

(And let me warn you right now: by definition, the Twist reveals something surprising. So in my examples below, take caution: there be spoilers ahead, swabbie. In particular, do not read if you haven’t seen but want to see the following movies: The Sixth Sense; Crazy, Stupid Love; and Spider-Man: Homecoming.)

The Twist is what happens at the end of Oedipus Rex, when Oedipus learns he accidentally killed his father and married his mother.

The Twist is what happens at the climax of The Sixth Sense, when we learn Bruce Willis is actually a ghost.

And the Twist is what happens in the finale of Crazy, Stupid, Love, where we discover that Steve Carrell’s super-smooth, always-hooking up sex mentor Ryan Gosling … happens to be dating Carrell’s daughter.

As you see, the Twist usually happens at the end of a story. (That’s Twist with a big “T” – though you can have several baby twists along the way.)

To put it simply, a Twist is an event that surprises you – you didn’t see it coming – but after you do see it, the discovery makes perfect sense. You realize it had to be the case all along. It feels inevitable.

The Twist leverages the greatest power, perhaps, that a basic story supplies: suspense. Curiosity. Finding out what happens next. The Twist is the ultimate payoff from building that curiosity.

Of course, to satisfy these two requirements – both surprise and inevitability – the talecrafter must bolt on the necessary set-up pieces in advance. This set up is crucial, or there’s nothing to pay off.

I recently saw a great example of a Twist in my favorite superhero movie this last year: Spiderman: Homecoming. Let’s take a detailed look so we can see how to properly set up a Twist.

So here’s Peter Parker. We see the kid learning to be Spider-man. He’s trying to be a full-fledged hero and eventually tangles with Michael Keaton’s character, the villain of the film. Even sees Keaton’s face. But he can’t quite capture him, much to his humiliation.

But Peter faces just as much drama in his personal life. There’s a girl – Liz. The two dance around each other, but Peter disappoints: He’s always dashing off to don his blue and red pajamas. (Like the time when he goes to her house party and Peter bails.)

The two never quite hook up.

But finally, Peter decides to commit. He asks her to prom. And she says yes.

In a whirlwind, Peter prepares for the prom, getting dance instruction (plus lessons on how-to-speak-to-girls) from his aunt May.

The big night comes and he knocks on Liz’s door, anxiously repeating what he’s supposed to say. The door opens …

To reveal Keaton! The bad dude is Liz’s dad!

I loved this Twist. I, at least, didn’t see it coming at all.

And yet, this Twist made perfect sense after I learned it. I didn’t curse the screenwriters, accusing them of fudging an artificial plot contrivance. That’s because they carefully laid the groundwork, putting several paving stones that led us down the path to the inevitable Twist.

Paving Stone One: we saw Michael’s Keaton commitment as a father in the very first scene of the film. We see him as the leader of a construction crew, showing off a picture drawn by his kid. “Kid’s got a future” his workman remarks. Keaton’s eyes twinkle with pride for his budding A-Player at home.

Two: We’ve seen that Liz is bright, precocious enough to have made fancy drawings when she was a little kid. Both she and Peter attend an elite “MIT for teenagers” kind of high school.

Three: we saw Liz’s house at the party scene and the girl lives in a mansion. It seemed outsized to me, to the point I felt compelled to comment on it to my wife. Somebody in the family must earn a huge wad of dough.

Four: we’ve seen that the Vulture hawks alien weaponry for some sweet cash, doing it all “for his family.”

Five: we saw a scene when Liz nearly plummets down an elevator shaft before she’s snatched by Spider-Man. Keaton sees the story unfold on TV and stares daggers at the screen.

Maybe he stares so hard because he’s watching his foe Spidey … or maybe there’s something else.

And yet despite all these steps toward the Twist, it still struck me as a complete surprise. In part because all those set-up pieces also served the plot at the time.

In fact, we weren’t expecting the Twist at that moment, because we were already anticipating something else. We were caught in the web of suspense in Peter’s own life: would he be able to stick around for the Prom?

(Bonus points for the Twist: it also twisted up Peter’s insides and heightened the drama: now he had to bring down Liz’s dad?)

Now, when you’re telling your sales story, you probably don’t have the kind of crazy twist that Oedipus had. (I hope.) And your main character’s probably not a ghost – unless, of course, you’re dabbling in the occult market.

But that doesn’t mean you can’t use a Twist. Maybe you’re holding some fact or principle that is surprising. Something you the product creator didn’t see coming. Some aspect of your product that is both startling and important.

If so, roll up your sleeves, grab your story trowel, and begin laying the bricks to set up that reveal. A few key pieces that telegraph the Twist but don’t shout it.

The MORAL: Adding a Twist to your sales story that’s both surprising and inevitable can help keep your story alive in the hearts of your prospects. 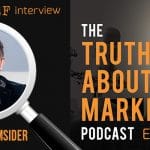 Ep 83: Building your authority as a freelancer (even if you’re new-ish) with Melanie Warren