How to use the “Doctors Dumbfounded” effect to Build Credibility & Desire: From Shyamalan to Schwartz 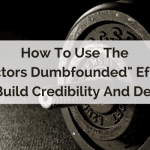 There’s a simple story technique you can use to quickly build credibility and desire for your product.

The best novelists and filmmakers use it, as so do the best ad-slingers. In fact, Eugene Schwartz lists it as the 7th (out of 13) way to “strengthen desire for your product.”

I recently saw this storytelling tool in action when I dug through the special features of one of my favorite super hero movies.

The movie: Unbreakable, by M. Night Shyamalan. Unbreakable tells the story of a man (played with delicious understatement by Bruce Willis) who sl-o-o-o-wly realizes he has superpowers.

The movie’s good; but the deleted scenes in the special features edition are an education in storytelling.

In one of the deleted scenes, we see Bruce Willis’s character bench press a staggering amount of weight: 500 pounds. Benched by a man in his 50s with an average build.

500 pounds is a lot of iron. Most of us would be impressed.

But how impressed? Sometimes it’s hard to know just how cool something is … until we someone else react to it.

That’s why Shyamalan didn’t just leave it with Willis lifting the weight.

He next cuts to a wider shot of the room that Willis is in: the gym of a college football team. (Willis is a security guard, or as one of the football players label him, a “rent-a-cop.”)

The room, formerly buzzing with jock-chatter, has gone silent. All these huge alpha males are staring slack-jawed at Bruce Willis. In disbelief.

That’s the moment when it really sinks in: there’s something special about this guy.

Everyone knows that big football dudes are strong. So when they stop and stare at a feat of strength, you know it’s a big deal.

The great Eugene Schwartz puts it this way (on page 90 of Breakthrough Advertising):

“There is nothing so astounding as the astonishment of experts.”

Novelists deploy this technique all the time. When they want to emphasize a character trait – say, how beautiful someone is – they don’t just describe that trait:

No, they show other people reacting to that trait:

“The room went silent. Everyone was floored by Andre’s flawless beauty.”

Or even better, they show the amazement of an expert:

“The bored casting director jerked from his seat when Andre walked into the studio. In 40 years of hiring models, he had never seen such perfect cheekbones before.”

This technique is clearly a form of social proof: when the crowd believes something, we tend to believe it too.

But when experts believe it, it’s Social Proof on Steriods.

I call it the “Doctors Dumbfounded” effect, because you see it often in health promotions.

Doctors are the (generally) accepted experts on health. So when they see results so impressive that they’re speechless, people pay attention.

Now, Shyamalan ultimately cut this scene from the movie, because he had already demonstrated this plot point in a different part of the film.

(Listening to Shyamalan explain why he cut this and the other deleted scenes is a Master Class in “Killing Your Darlings”, the subject of my last post.

If you look for it, you’ll see this technique used all over your favorite movies, books, and TV shows. Take note how it’s done, and see if you can work it into your next ad.

The MORAL: Use the “Doctors Dumbfounded” effect to create quick credibility and desire for your product. 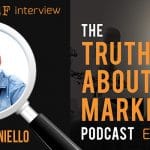 Ep 65: Beating Back “Writer’s Block” And Finding Your Flow with Angie Colee