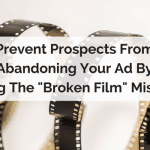 I used to work at a movie theater in high school. One of my best jobs ever. I could watch any movie for free, and eat all the popcorn and drink all the soda I wanted.

But some days were bad. When the film skipped — or worse — broke.

(These were in the old days, kids, before digital films in movie theaters.)

Then it was my job to raise the house lights and enter the theater. Stumble through an apology and promise I’d get the movie up and started in a just a moment.

And hope that the audience didn’t start pelting me with Junior Mints or worse, demand their money back.

Then I’d dash upstairs to the hot projection room and quickly splice the film back together.

Because people don’t like it when their story gets interrupted.

Technical glitches are one thing: blame the computer, the wifi, the tech dude. Those are on-offs that can usually be fixed.

But when the story itself includes such “Broken Film” moments, the audience will be ejected from the tale every time it’s told.

And ads that make this same mistake will lose customers.

What are these “Broken Film” mistakes?

Anything that makes the audience stop and think and say to themselves: “This don’t seem right.”

I’ll go even farther and say that anytime your story, whether in a film or an ad, causes your audience to stop and think at all, you’ve made a mistake.

Now, don’t get me wrong. A good film can make you think. Doesn’t have to be some somber indie flick, either. The best blockbusters get me to yapping and thinking.

But that’s for after. During the film I want to be wrapped up in the story.

Same with an ad. John Carlton calls it the “Greased Slide.” Everything pushes the story forward to the close.

Sure, afterwards the prospect can think about it. And with good risk reversal in place, she can even sample it out and decide later. But during the ad, it’s all about constant engagement.

Strangely, though, the antidote isn’t less thinking on our parts as ad crafters, it’s more. We need to make sure our ad is wrapped in a protective shield of logic.

Because when our subconscious mind spots a flaw in fact or logic, it signals a warning. The warning wakes up the “thinking” part of our brain, which gets to nitpicking.

The film breaks, and the audience is yanked from the tale.

I was guilty of this kind of Broken Film moment recently, when I spent a whole afternoon devising a clever analogy for an offer I was writing.

I really dug the analogy. I thought it was very clever.

(Danger! Danger! My brain should have told me. Cleverness is almost always a bad sign. But sometimes I can’t help myself. I want to get the gold star for ingenuity.)

Luckily, I took the copy to my wife and ran it past her.

She said the analogy made her stop and think.

Uh oh. So I scrapped the whole thing and replaced those paragraphs with a single straightforward sentence.

Does your copy contain these “Broken Film” moments?

Here’s an easy way to find out: ask someone else to read it.

And the good news is, the reader doesn’t have to be your ideal prospect. They don’t have to want what your ad is selling.

They just have to be able to answer you this:

“At any point, did you have to stop and think to understand the ad?”

If at any point they did, you’ve just spotted a break in your film. Fix it however you need to. Add more straightforward explanation.

Or maybe better, cut the whole section out.

The MORAL: Fix the “Film Breaks” – gaps in logic, believability, clarity – to prevent your audience from exiting your ad. 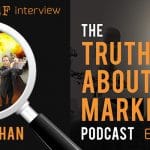 Ep 121: Jon Buchan – How To Reach Important People With Humor