Special episode today with that man, Max Rouzier on race relations – how to talk about someone’s identity (without offending them), why remaining silent is worst than saying something, and more…

Get this episode all up in your earhole here: 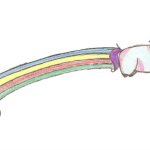