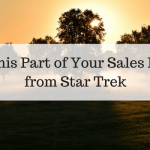 It’s easy to bore your reader when you shift into science mode.

Yeah, you often need some technical explanation to prove why your product works.

But, it’s easy to get lost in the weeds of jargon and research. That’s when you lose your prospect.

So how do you keep it interesting?

Without your techno-babble landing like a fossilized turd into the middle of your copy?

Let story be thy guide. Stories don’t have time to waste on bloated technical descriptions (unless you’re Moby Dick and you spend an entire chapter explaining how to tie a knot). They have to keep the story rolling and give just enough detail to make the whole ‘waking dream’ feel real.

So let’s peer how one story does it: Star Trek II: The Wrath of Khan … in my opinion, the best of the original franchise films.

Here’s the story: Admiral Kirk, now working a desk at Starfleet headquarters, must take command of the Enterprise to meet a threat.

It turns out his old flame Carol Marcus, a brilliant scientist, has invented a fabulous new machine called The Genesis Device. But someone is trying to take it. Carol rings up Jim to demand why Starfleet has threatened to seize the new technology.

(Starfleet has no such plans. A very old foe is behind the confusion, but Kirk doesn’t know this yet.)

So, to explain what the Genesis Device is, the scriptwriters have Kirk summon his old pals Spock and Bones to his quarters … to watch a little science film.

Now you understand how The Genesis Device works. And it was fun, right?

One reason why this is such a great example: this explanation is intended as a sales promotion. Dr. Marcus is trying to convince Starfleet to fund her project. So she needs to keep the science simple enough to keep her patrons interested.

This is how you shower your prospect with science.

We can draw 4 “Story Science” Keys from this scene:

Let the explanation be straightforward, with obvious “duh” logic.

In Khan, the actual explanation is very simple:

“It is a process whereby the molecular structure is reorganized at the sub-atomic level into life generating matter of equal mass.”

That makes instant sense. Note that Carol doesn’t go into the nitty gritty of how the molecular structure is reorganized.

Now, you may need to go into more detail, depending on the sophistication of your audience.

But if you do, you can still pivot back to how this technical mechanism will change the prospect’s life, like Carol does later …

“Instead of a dead moon, a living breathing planet, capable of sustaining whatever life forms we see fit to deposit on it …”

Second, while she’s speaking, we see …

The filmmakers stroke our short attention spans with a series of novel images.

The little animation of the DNA double-helix helps to reinforce the idea that “matter is reorganized.” (Though it seems primitive, this was a groundbreaking use of computer graphics in film).

And then the big wow: we see a brand new planet emerge. The dawn of creation. This is when your whiteboard animation budget pays off.

Why should we listen to a bunch of technical talk? Your prospect must need to know this info … as if her life is riding on it. (Which it might.) You do this by creating the right context.

In this scene, Kirk is about to take command of the ship from his best friend Spock … risk the lives of a bunch of greenies new to the ship … and “reopen” old wounds with his ex-love Carol Marcus.

So we need a big reason why Kirk does all those things: the value of the Genesis Device. It’s an earth-shattering invention (almost literally earth-shattering). This context has already been established in the run-up to this scene.

Story Science #4: BREAK IT UP

Last, this scene isn’t one long explanation. It gets broken up and commented on.

Spock interrupts Carol’s presentation. Plus, we see the characters reacting to the information. And when Carol’s done speaking, we hear the Trek Trio’s commentary, like when Bones erupts:

“Dear Lord … do you think we’re intelligent enough? What’ if this thing were used where life already exists?”

To which Spock coolly responds:

“It would destroy such life in favor of its new matrix.”

This crisp retort enrages Bones. So — being the fallible, emotional human he is — he hurls insults at Spock, calling him a “green blooded, inhuman …”

This conflict keeps the explanation lively.

Now, how do we put these together in a sales letter?

You can see a great example in The Venus Factor, the female weight-loss program that has smashed sales records on Clickbank.

In the original VSL*, after the lead and the personal story, the narrator goes into science mode. When you watch it, you can see the narrator use all 4 Story Science Keys to keep the explanation lively:

“Science has now discovered that virtually everything to do with weight loss for both men and women is controlled by one master hormone.  This hormone that controls 100 percent of your body’s ability to burn fat is leptin.  You may not know how leptin works, so let me quickly explain. High levels of leptin speed up your metabolism and signal your body to burn fat and low levels of leptin slow down your metabolism and signal your body to store fat.”

Those are the basics. Told simply. Doesn’t go into the biochemistry of how leptin works. Stays on the surface, where the action and drama is: what causes weight-gain.

Then, during this explanation, we are kept entertained with fun images. (Story Science Key #2)

Third, there’s a big reason why to hear this explanation (Story Science Key #3). Obviously, the prospect wants to lose the weight. But the narrator doesn’t rely on this alone.

He also ties all this leptin-talk back into the empathy-building story he opened with … the pain of how his sister Lisa can’t lose the weight:

“With this being the case, guess what happens to your leptin issues following pregnancy. Well, they get a lot worse, which is exactly why losing the baby weight can be painstakingly difficult as my sister Lisa knew all too well.”

But how about Story Science Key #4? How does the narrator break up the explanation when it’s just one person talking?

Yes, there is just one person talking, but he’s talking to you. So you become a participant. He echoes thoughts and comments you may have, and brings the explanation back to you (also raising the stakes), like here:

“This is exactly why you experience frustrating weight loss plateaus on diets so much faster than men.”

To sum: keep the logic simple, sweeten it with eye candy, give a big reason why, and keep the action lively.

One last thing: if you face writer’s block next time you sit down to spin some story science …

… just shout this out loud:

That will get your blood pumping.

The MORAL: Use the “Story Science” to deliver explanations that rivet your reader

*Note, if you’ve seen the video before, you might get a different VSL (appropriately pegged to the more aware prospect that you now are.) To see the original, open the link in an incognito window in Chrome. I don’t know how you do it in other web browsers. I write about stories, okay? 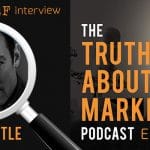