[Story Sells] How Factoid Copy Can Be Fun, A-TEAM Style 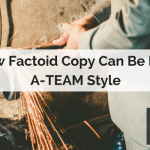 You know the game is on when B.A. grabs the welding torch.

I’m talking about the scene late in an A-TEAM episode when the gang needs to build something superfast to save the day. Usually involves armoring a beater car with junk metal. Or devising a wicked booby trap. (But don’t worry kids, no one dies in this show.)

It’s like the sequence in the first Iron Man where Tony Stark develops his slick armor step-by-step in his “man cave” with help from an insouciant robotic arm.

Or the sequence in the movie The Manhattan Project where the teenage hero, a proto-Zuckerberg with both brains and balls, builds a nuclear bomb from scratch in his toolshed.

In all these story sequences, we see how something is made. Step by step. Sprinkled with some kind of “spice” to keep it interesting:

… kind of like amped-up episodes of “How It’s Made.”

Why does this matter for advertising?

Because for many products, at some point you’ll need to show how it works. Or how it was built. Or simply give a bunch of technical information.

So why not make it fun?

If you have a bunch of stuff to communicate, and you’re struggling to make it interesting, maybe you should enlist these two words:

“Spice” I mentioned above: Use some kind of device to keep things interesting. Not so much that it distracts from the information you’re trying to convey … but enough to lend humor, interest, wow-ness, to foster attention. Something cool in and of itself.

For example: David Ogilvy’s classic “At 60 Miles an Hour, the loudest thing in this new Rolls-Royce comes from its electric clock.” (See several versions of the ad at Swiped.co [LINK http://swiped.co/file/rolls-royce-ad-by-david-ogilvy/]

The ad is heavy with technical detail, but the “spice” comes from the headline: something that caused an “oooh, aaah.” It kicks of the drama of a Rolls-Royce. Making it feel special. That way, the numbered facts that follow (19 of them!) fit into a cool story.

“Stakes” means why your technical stuff matters, in the context of your story.

In an A-team episode, the stakes build throughout the whole show:

Some good people are in danger from local toughs. The sheriff won’t help (usually because he’s on the take.) They find the A-team and “hire” them. The danger mounts, maybe a kid is captured. A final showdown looms. But to win it, the A-team needs firepower. Thus the building sequence: Break out the welding torch.

For an advertisement, the stakes are usually shown in the problem set-up.

If your technical sequence has an “origin story”, it usually shows a creator who faces a challenge and must build her way out of it.

Or the ad could simply lay out why a problem is so challenging, listing the many attempts to succeed and why they’ve failed so far. This raises the stakes, because you’ve basically built a higher and higher hurdle for your product to jump.

Approaches like these help to set the context, so the prospect wants to know the details of how it worked out.

Give er a try, and see if it works for you. And if you can, throw in a welding torch. Because they’re cool.

The MORAL: Serve up a “SPICY STAKE” to help your prospects chew through a bunch of technical info.

Ep 74: How You Can Use Basic Songwriting Principles To Guarantee Powerful Copy with Addison Rice