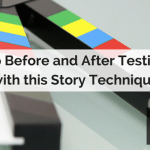 In Blake Snyder’s useful screenwriting how-to book, Save The Cat, he talks about two scenes you must have in your movie.

An opening image. And a closing image.

And one more thing: They should be OPPOSITES of each other. Why? To show how the character has changed and grown. This journey is the character’s “Arc.”.

Basically: Life Before your story, and Life After your story.

And the testimonial, perhaps the most fundamental story element in an ad, rests upon this technique. I don’t see it going away anytime soon, no matter how many before and after pictures flood our ads. In part because we are always drawn to improvement.

But perhaps more fundamentally, we are drawn to change. Transition. Because that’s life, folks.

That’s why nearly all stories are about transition. And many of them, particularly movies, use the Save The Cat opening/closing image technique to book-end the tale.

Opening Image: Admiral Kirk is on the bridge but not in command of the Enterprise. He’s a down-in-the dumps desk jockey with a high rank. He feels: “Old. Worn out.”

But in the course of the story, Kirk changes. (With a little help from “KHAAAAAAAAN!”)

So by the end we get:

Closing Image: Kirk in command of the Enterprise bridge. A look of wonder on his face. When asked how he feels, he replies: “Young … I feel young.”

(A series, by the way, that Andrè Chaperon just recommended we marketers watch for a deep dive in immersive, addictive storytelling.)

Back to The Judge.

Opening Image: Downey is in the men’s room of a courthouse when he is confronted by his opponent, the prosecutor. The prosecutor chides Downey for being a gun-for-hire with no soul. Downey doesn’t care. He nonchalantly skewers the prosecuting attorney while in mid-stream at the urinal … and then proceeds to literally douse the other lawyer with his liquid scorn.

The Before is very clear: Downey is a jaded sellout.

But then the story happens, and he returns to his hometown and confronts and ultimately reconciles with his ailing father (the stern town judge who’s on trial for murder. Guess who defends him?)

Closing Image: Same courthouse bathroom. Same two lawyers. Same court case (which had been postponed for Downey’s family stuff.) But this time, there is no peeing on anyone, literally or figuratively. In fact, the prosecutor wonders why Downey seemed to lose so easily. The man has changed.

What’s so nice about this technique is that it puts the character in the exact same situation:

The bridge of the enterprise for Kirk, and the courthouse bathroom for Downey.

By putting the characters in the same setting, the screenwriter shines a spotlight on the character’s transition.

To illustrate with an ad, let’s take the 800-pound gorilla of testimonials: the before-and-after weight loss ad.

A typical testimonial shows the before and after pics with the numbers.

Nothing wrong with that. That’s the big show we came to see.

But, if you’re telling a story, you can enrich the experience – provided of course that it’s the way it went down.

Suppose our story starts with a man who takes his girlfriend to a fair. He’s excited to take her on the zipline ride. But when he gets to the front of the line, he sees the sign that shows the weight limit … and he’s thirty pounds over it. He feels deeply embarrassed in front of his lady.

So he goes home determined to change. He discovers a new diet system. Maybe tries different things. The weight starts to come off.

He returns to the fair with his girlfriend, this time with a new sense of pride. He’s under the weight limit with plenty of pounds to spare … and the happy couple rides the zipline off into the sunset.

And for all you over-achievers out there, you can try a second story principle to deepen the drama.

To help us see how this works, let’s turn to another book on dramatic writing dating all the way back to the 1940s.

It’s the classic The Art of Dramatic Writing by Lajos Egri. Egri places character front and center in dramatic writing. And, specifically for our purposes, Egri dives deeper into what a character arc looks like.

It’s not just two states, a before and after. Rather, the arc or transition includes a series of steps.

Take, for example, the transition from friendship to murder. Here’s how Egri charts the course:

Now, clearly there’s more going on than just these steps. The person walking this road is a certain type capable of these transitions.

But here’s my point: we can enrich our sales stories, even the humble testimonial, by showing some of this transition. Because in life, there is usually such a transition. And when we can show that in a sales story, we make it that much more immersive.

Why? Again, it’s what real life is all about. It’s plain more believable when there are steps in between. Yes, instant fixes are great if they work … and the right product really can leap frog us ahead to a solution. But the development of that product at least took work, and showing that work can deepen credibility.

You’ve probably read a promotion where someone “spend weeks looking for the solution” and then they finally found it. Well, that indicates a struggle, but it doesn’t show a transition. (I’ve made that lazy mistake myself.)

To find the transition points usually requires some digging. To see what actually happened in the story. Discovering the little way points.

So for the weight loss example, there might be some yo-yoing weight in the middle of the story. False hopes. Slow starts.

To go from embarrassment to pride, we might show:

Effort → Disappointment (after a false start)

Disappointment → Disillusionment (if it’s not getting better)

(Interestingly, we see transition points in the classic structure of a sales letter: the “AIDA” formula. The ad starts with grabbing somebody’s Attention, then piques their Interest, then builds Desire, and finally prompts Action by asking for the sale. That’s an arc. And the person walking this arc is the prospect – at least those who end up buying. They move from Indifference or Skepticism … to Belief and Action.)

So that’s story technique dos: show at least one transition point between the before and after to deepen the reality and meaning of the story.

Put the two principles together and you’ve got a killer combo for your next testimonial.

The MORAL: Show the ARC or transition of your character’s “before and after”, the points along the way. 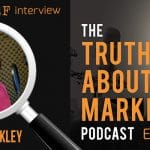 Ep 78: The “FIRE” Formula For Finding Your Market’s Biggest Needs with Catie Harris