[Story Sells] “Ice-Breakers” in Ads: How To Gradually Introduce a Radical Idea 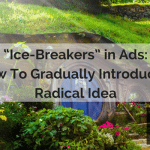 J.R.R. Tolkien had a big problem.

He loved the ancient, epic tales. He began writing his own (see The Silmarillion).

But he quickly discovered that these ancient worlds of honor and vengeance, with black and white heroes with little characterization, were almost totally inaccessible to a modern audience.

All that oath-swearing. And listing of lineage.

And, says scholar Tom Shippey, the characters felt cold and remote: they embodied an ancient heroic virtue that was simply out of style.

You know, ones they could identify with.

If he wanted to write a tale that sold, he’d have to have characters that the reader identified with from page one.

So, he created hobbits.

Just like the people around us. Thus, we can relate.

Which is why, perhaps, both The Hobbit and The Lord of The Rings begin with hobbits. The hobbits are “our way in” to the deeply mythical world of Middle Earth.

That’s where the story starts, but it doesn’t stay there. Our redoubtable hobbits trek out to the wilder, older world … a dangerous land filled with Kings and Oaths and Blood Feuds.

But by that time, we’ve been gradually immersed into this heady world and so we don’t instantly depart when people start speaking in these and thou’s and Elvish verse.

By starting with accessible characters, we’re led gently into the story.

It’s like an ice-breaker in conversation: start with something small, inoffensive, light.

This story principle – begin with an accessible opening – applies to sales stories, too.

In fact, if you want to get cheeky (and I do), you could say Tolkien borrowed this story principle from Eugene Schwartz. In Schwartz’s Breakthrough Advertising, he devotes an entire chapter to the copy strategy he calls “gradualization”.

Gradualization is just like it sounds: Start your copy with the familiar and then gradually lead to the new.

Why? Some ideas (or claims) may be too radical for the reader to accept at first, no matter that they are true.

So you gradually transition them from what they already believe to what is possible.

Schwartz uses the example of an ad for a tv repair do-it-yourself instruction manual. The first ad he tried opened with the claim “Save Up to $100 A Year on TV Repairs.” The ad failed.

Why? Schwartz reasoned that the average person (in the 50s) figured that at-home TV repair was too complex for the layman to master.

So he then he tested a new approach, one that employed the principle of gradualization. The new headline: “Why haven’t TV owners been told these facts?” Doesn’t make any claims about tv repair. That comes later after a smooth, logical transition.

One way we can use gradualization in a sales story is to go back to Tolkien and start the tale with an “avatar”, a character who is just like the prospect. Facing the same situation. The same struggles. Could be the product creator or a very satisfied customer.

Or instead of starting with a character as an “ice breaker”, we can start with a notion, as Schwartz did. Begin the story with a claim or idea that’s acceptable, even though startling. Especially if the sale requires the prospect to come to believe something that might be hard to swallow cold.

The MORAL: Warm up the crowd first with an “ice-breaker”: a character, idea, or situation familiar to the prospect, and then gradually introduce the more radical solution. 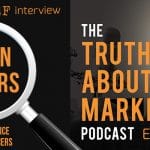 [CCR] Ep 80: Can Your Passion Hobby Be Your Business? (Case study with Craig Beckta)