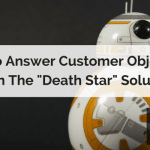 As I write this, San Diego’s Comic Con just wrapped up. Fans were served tasty selections of their favorite fictional universes.

Predictably, some offerings unleashed a flurry of geek-citement.

But others ignited a firestorm of critiques.

Cause few folks are as argumentative as fanboys. As a market, they’re sophisticated and very vocal.

That’s why storytellers in this market work at answering these criticisms before they can fester.

In short, it’s very much like the task faced by marketers: how do you answer (and defuse) deal-killing objections?

In both cases, you can use the same technique to answer objections and keep people in the story – or – clinch the sale.

And sometimes, when you answer an objection, you discover a powerful hook for your whole campaign.

We’ll see how the biggest story franchise in fandom did this in a moment, but first, a reminder:

The objection depends on your audience. One person’s burning concern is another person’s “meh.”

For example, some people can’t stand the “science” in Star Trek, to the extent they can’t enjoy the show.

For others, it’s no problem. They either don’t know enough science to get worked up about it (me), or even if they do, the errors don’t bother them because they are tuning in for the characters and the drama. (Or the skintight uniform on a certain balding captain.)

So you rarely please everyone. But that’s okay, as long as you know the likely objections of your market.

Staying with the Stars, let’s move now from Trek to Wars, and look at one big fan objection.

The 1977 Star Wars is a classic and loved by millions, no question. Still, one plot point has plagued the film through the years.

I’m talking about the climactic moment when Luke destroys the Death Star with one shot.

Really? You build a super weapon so powerful it can destroy entire worlds and you decided to build a simple “off” button?

(Yes, I’m exaggerating – it wasn’t exactly a cake walk for Luke to launch the fatal explosive. But it wasn’t too hard either – like shooting Womp Rats in your T-16 back home.)

But that objection was finally answered in last year’s Star Wars movie Rogue One. And in fact, the answer formed the basis of the plot.

It turns out that the Achilles Heel in the Death Star was planted by design. An undercover Rebel scientist built it that way and hid it from his superiors.

Answering this objection stitched up a longstanding objection. Plus, it gave a nice little bonus: supplied the plot for another multi-million dollar installment.

Call it the “Death Star Solution”. Answer an objection and it can be your best friend.

I copied this 3-step process for handling objections from Harry Browne’s classic The Secret of Selling Anything. It’s a simple technique to address and answer objections that can be used in most situations – including stories.

And sometimes it can give you a powerful hook for a brand-new campaign.

Take the classic “We Work Harder” ad from the 60s, by rental car company Avis. They were 2nd in the market, but they turned that objection (“but you’re not the best”) into a compelling hook (“that’s why we stay hungry.”)

Objections can seem scary. But they may be an opportunity to go deeper into a benefit. Or compare yourself to the competition. Or discover an entirely new hook.

The MORAL: Use the “Death Star Solution” to answer objections. 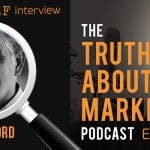 Ep 130: Mark Ford – Hard Lessons From The Most Interesting Man In Direct Response

Ep 71: How To Add Tension To Your Copy And Keep Your Readers Glued with Carolynn Ananian