[Story Sells] TESTIFY, brother: How To Tell A “Conversion Story” that turns your customers into your best promoters

A few years back I followed my buddy to a multilevel marketing event for a health supplements company.

It was a big event, designed to bring curious seekers into the fold. Presenters talked up the company and the products … but what I remember most were the testimonials.

And when I say testimonials, I mean ‘testimonial’ in the original “This is how I found Jesus” type of testimony.

In fact, when I saw people weep on stage … and the looks of ecstatic adoration on many of the audience members … I felt like I was at a religious revival.

I mean this with all due respect. The people who shared their stories meant what they said. They had discovered something that both:

ONE, on the product side, changed their health for the better (perhaps even saving their lives) …

And TWO, on the business side, put a bunch of money in their pockets. For many, this meant staving off bill collectors and out of bankruptcy.

Dozens of people strode to the stage and shared their stories … shared how they were at their lowest point and then discovered this opportunity that changed their lives. Many were in tears.

And, each one of these stories showed how the person had “seen the light.” Just like at a church when people testify to their conversion.

And that got me thinking …

The kind of stories people share about their religious faith – true “conversion” stories – can be a powerful model for any kind of persuasive storytelling.

So to discover these patterns, what better place to look, than one of the most famous conversion stories ever?

I’m talking about how Saul of Tarsus became Paul the Apostle.

Perhaps you know the story …

Saul had helped to persecute the early Christians. He hated their heresy and got many thrown in jail. But then, one day, while on the road to Damascus, he was struck blind by a vision of God. After stumbling into the city, a Christian ministered to him … and Paul was saved. Transformed.

Almost immediately, he began to preach the Gospel to the local synagogue at Damascus.

Now what’s interesting is that Paul’s “Conversion Story” has 4 identifiable elements that show up in many other conversion stories.

And when you truly have a product that changes lives, you can use this 4-Part Conversion Story to turn your best customers into passionate apostles of your message.

Here are the 4 parts:

1. Walking the wrong path, but not necessarily realizing it.

The way the story was told, Paul was living under darkness – but he didn’t necessarily know it. (Like when you’re living high on the hog and maybe part of you wonders when it’s all going to come crashing down.)

2. Dramatic Confrontation with the consequences of the Wrong Path. (NOT a gradual discovery.)

In Paul’s case, God confronts him and literally strikes him blind.

This is like a family intervention for an alcoholic … or the moment when your doctor looks you in the eye and says “you have Type II diabetes.”

This is not the moment of discovering solution, but it’s the moment your hero recognizes he has hit ROCK BOTTOM.

In Paul’s case, he hears the Gospel and is saved. He literally can see the light because his vision is restored.

This can be the DISCOVERY as in the 60 Second Sales Hook — the moment the hero sees the solution to his problem.

In Paul’s case, the discovery is the result – he is saved – but in other stories there may be more of a development later.

Paul began preaching immediately. (You can imagine the dropped jaws at the local synagogue, especially since days before he had been one of Christianity’s most feared opponents.)

In your sales story, your hero can use this as a transition to introduce his solution to the prospect. (It provides a good rationale for why he’s selling something.) For example, “I couldn’t stand back and watch the drug companies turn us into zombies … I knew I had to share this information right away.”

You can also use this step to model ideal behavior for your customers. Make it easy for them to share their results, whether as a testimonial to you, or on social media, or with a badge or special t-shirt.

We all love to share good news. (When I interview customers who have changed their lives, almost always they tell me they’ve passed along what they’ve learned to friends and family.)

So there you have it: 4 elements of a powerful conversion story. You can use it as a template for interviewing testimonial customers, or as the outline for a product creator’s origin story, and more.

Important Note: If you have to focus on element, I’d go for #2 – the Dramatic Confrontation. That really sticks in people’s minds. (After all, most of us know the “Road to Damascus” part of Paul’s story, even though his conversion didn’t actually take place until after he got to the city.)

The MORAL: Use the 4-part “Conversion Story” to transform your best prospects into proselytizing converts. 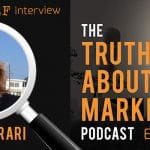