[Story Sells] When It’s Good To Confuse Your Readers

You should always be clear in your marketing, right?

Not so, my friend. Sometimes you want to throw a little confusion into the mix when you tell a sales story.

I just got done watching a slate of Christmas movies. And my current favorite – Love, Actually – contains a scene that features a master storytelling trick that you can use to hook readers into your message.

There are a lot of good storytelling tricks to be hacked from this flick, but let’s just look at the best scene in the entire movie, and see why it sucks in our emotions so well.

The scene I’m talking about is where Emma Thompson’s character unwraps an early Christmas present in front of her husband and kids. She’s excited because she *knows* that the present is a fancy piece of jewelry. (She had peeked at the unwrapped box a few days before.)

She rips the package open. But it’s not the necklace. It’s a CD instead.

She realizes the truth in an instant, and the shock is like a slap to her face: Her husband’s gonna give the necklace to someone else.

We understand all this in a flash. And so does Emma Thompson’s character. We see the shock and pain written in her face.

But that’s not why this is the best scene in the movie.

Instead, she puts on a “happy face” for the family. We see the struggle in her quivering lip, hear the catch in her voice. It’s heart wrenching for us. We understand exactly what that’s like, having been through it ourselves.

She stretches her face into a smile and makes a few game responses to her husband’s comments on the gift. He’s awfully proud of himself for picking out a Joni Mitchell compilation for her.

Then she ducks out for a sec to collect herself. She slips in Joni’s music and listens to a haunting version of “Both Sides Now” in a gravelly voice textured by decades of cigarette smoke.

We watch her struggle to plug a damn on the tears that threaten to overflow.

And we are completely involved. Emotional engagement is high.

Because of the conflict between the surface (she smiles) and the true reality (she’s devastated).

This Contradiction Story drives intense interest. In part, probably, because it creates curiosity, the main emotion that keeps readers engaged: How will this conflict resolve? Will she confront him? Cause a big scene later?

(English teachers call this conflict “irony” and carve it up into at least three different kinds. But it’s a pretty simple idea: irony is a conflict between the apparent and the real.)

This conflict is confusing on its surface – her reaction doesn’t make sense – so it begs to be resolved.

Which is why a headline that features this kind of conflict can hook people into reading the ad.

In Breakthrough Advertising, Eugene Schwartz cites contradiction as a headline technique, like in this chestnut:

“How My Bald-Headed Barber Saved My Hair.”

Or Mel Martin’s classic “Bills it’s okay to pay late.” You gotta read that, don’t you?

So, when choosing what story to tell your tribe, ask yourself: Which story of mine (or of my customer) contains a big fat apparent contradiction?

Or any seduction info-product pitched by an awkward troll … who nonetheless can snag a date with any random supermodel.

Contradiction begs to be resolved. We gotta know how that story ends. The tension needs to be released.

It’s what heightens the romance in my favorite scene in another Christmas Movie, It’s A Wonderful Life.

(I wrote about this scene last year). Here the tension ratchets up when George spits at Mary that he doesn’t want to marry her … but then breaks down in kissy kissy a few seconds later.

Use a Contradiction Story to drive maximum emotional engagement and pulls the reader forward with curiosity. 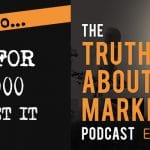 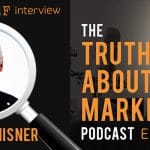