[Story Sells] Quickly Grab a Prospect’s Attention with these “Werewolves” 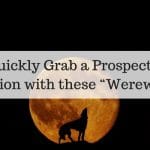 When I was in 5th grade, I woke up extra early on Halloween morning and took a seat in the makeup chair.

My dad had a plane to catch in a few hours but before he did, he smothered grease paint on my face and glued three layers of fake fur, to transform me into a snarling, howling, beast of a boy.

I was a werewolf.

When I got to school, everyone stared at me. Partly because I looked like I was wearing a beaver on my face.

But I also earned attention because, as a werewolf, I was a walking contradiction. How can a boy be also a wolf?

And human attention systems are tuned to notice such apparent contradictions.

In his book on the evolutionary roots of storytelling, On The Origin of Stories, literary scholar Brian Boyd says:

“We crave one another’s attention, but no one savors stories confined to the banal and expected: we know we would be better off attending to the real world …

Recent research shows we remember best those stories with characters that violate our categoric expectations, crossing one animal kind with another, or combining human and animal …”

From the Sphinx of the ancient Egyptians … to the Minotaur man-bull of the Greeks … to the present day stable of half-breed creatures like vampires and werewolves, we humans have always been fascinated by creatures that buck stereotypes.

Call it the Werewolf Rule:

The Werewolf rule isn’t just for monster characters, either.

Take the character Jim Rockford of The Rockford Files: Jim is a private detective who’s afraid of guns. This defies the tough-guy image of private dicks.

(To be fair, Jim does keep a gun in his cookie jar. But he’d rather reach for an Oreo than a revolver.)

Storytellers know that contradictory characters keep an audience tuned in.

And we can use this old storytelling trick to capture attention in ads.

John Carlton’s “One Legged Golfer” is a prime example. Likewise the character featured in the classic headline “How a Bald-Headed Barber Saved My Hair!”

These characters come pre-loaded with a set of expectations:

Good golfers must have the full set of limbs. If you’re bald, you probably don’t know how to harness hair regrowth.

But these winning ads seize attention by introducing characters who destroy those expectations. We pay attention because we want to know how in the heck this happens. We want to resolve the apparent contradiction.

Other examples: A “pharmacist who refuses to take meds” and “an illiterate who authored a best seller.”

Such head-scratchers win attention – especially if the prospect wants to write a best-selling novel (but hates to write.)

And if you feature such a “Werewolf” in your headline, you pay it off in the body of your ad by resolving the contradiction.

For example, such a headline — “How an Illiterate authored a best-selling book” — could conceivably pitch Dean Jackson’s 90 Minute Book, an info-product which breaks the back of writer’s block with a simple technique.

(Pleasingly, Mr. Jackson went full “meta” on us by using the technique to author the very book that teaches the technique.) 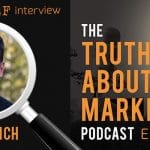