Legend has it that storytelling began in the flicker of a campfire … when the prehistoric hunters gathered round at the end of the day and wove tales of slaying the might beasts.

In so doing, they exchanged useful information, with storytelling as the vehicle.

But maybe storytelling evolved someplace else;

Instead of the campfire, maybe it was the watering hole.

“Did you hear what Grok did to his wife last night?”

Yeah – perhaps storytelling was born from the seedy threads of gossip.

It’s part of our nature – you might call us “Homo Gossipus.”

Religions and moral systems have tried to beat out this urge to spill secrets – and for good reason.

Gossip can destroy reputation because it spreads like wildfire. (It’s the original viral video.)

When I was a boy, my religious instruction recounted a cautionary tale about gossip.

In the story, a woman was deeply unhappy because she was an outcast in her community. (She was a terrible gossip.) So she went to a wise man for help.

He said he could help. He told her to gather a hundred feathers, climb the tallest building in the village, and release them to the wind.

Puzzled, but desperate for change, she did as she was told. She returned to the wise man the next day.

“Now I want you to gather all the feathers and bring them back to me,” he said calmly.

“What? But … but … that’s impossible!” she stammered. “They’ve scattered to the four winds! I’ll never be able to gather them all.”

The wise man nodded. “Yes. And that is what happens when you gossip – once you tell it, you can never get it back.”

Chastened, the woman returned to her community and gossiped no more.

But a quick look at the National Enquirer or TMZ tells us that gossip isn’t going anywhere.

(TMZ is estimated to earn $59,429 a day – that breaks down to a cool couple thousand every single minute.)

Consider this recent headline from TMZ:

“Whoa! Is THIS the next celebrity Outed in Ashley Madison Cheating Hack?!”

Like a bell ringing for Palov’s pooch, the sentence above ignites a curiosity to learn the name of this new malefactor in the ongoing scandal.

And that’s a clue to the usefulness of gossip — why it sticks around.

Gossip is a story about somebody who did something wrong.

And now that bad boy is getting exposed. (“Serves him right!”)

In other words, gossip can steer us clear of untrustworthy louts. Keep us from getting burned.

Maybe that’s why our brains are hardwired to pay attention to it.

The weird thing is, we’ll listen to any piece of gossip, even if we’ll almost never meet or interact with the person.

Who didn’t listen to the date-rape controversy surrounding Bill Cosby or the racist rant of Michael “Kramer” Richards?

And these are just comedians, for cripe’s sake – not even politicians who make laws that shape our lives.

It’s as though nature installed a gossip mechanism that switches on our attention … even if the original rationale for it is gone.

How mother turkeys ignored dangerous polecats when experimenters rigged them up to squawk like baby turkeys. The sound alone was enough to trigger the “you are safe” response.

Likewise, the features of gossip are enough to trigger our brains to pay attention and listen.

A juicy bit of gossip includes a few important elements:

First of all, it’s a story where somebody’s reputation is in danger because they were NAUGHTY.

Second, it’s NEWS – nobody knows it before.

And if it includes a cover-up, even better … because if it wasn’t naughty, why do you need to cover it up?

Third, it helps if gossip is about a SPECIFIC person – best of all, an individual with a first and last name.

If it’s not an individual – say, if it’s a company – than a specific company is usually better than a group like “Big Pharma.”

And lastly, it includes a SOURCE – a trail of breadcrumbs to the source of the story – to verify credibility.

Obviously, the weaker this trail becomes, the less likely you’ll be trusted;

So if the tale comes from your sister’s husband’s college roommate’s second cousin’s hairdresser … you might have a hard time convincing anyone.

(Exept – the juicer the gossip is … the more dangerous, controversial … the more we’re willing to overlook a dodgy source.)

So a sales story with gossip features can do the same thing.

It certainly suggests a controversy – an illegal sexual stimulant – and the image is pretty vivid.

It features a denial – which is second cousin to a cover-up.

It’s got the other features of gossip, too: it’s news, it’s about a specific person, and we learn it directly from the source itself.

“Wife of auto parts store owner swears under oath she did not use sex to get these great deals from suppliers!”

And next Carlton makes an important point.

It’s not enough to grab attention with a gossipy hook. Because unless you want them to turn away, you had better take them home with something they can use. As JC says:

“Grab your reader’s attention … and then immediately bring your point home with benefits he can use.”

Our brains pay attention to a specific kind of story – gossip – that you can use to grab attention. 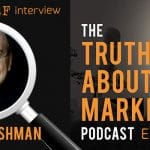 Ep 23: The Truth About Michael Fishman 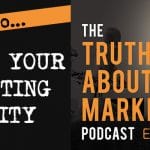 Ep 24: How To Expand Your Marketing Reality