On the first day of my improv class, my instructor Mike Christiansen asked us what we wanted out of the class.

One student offered what seemed like a no-brainer: “To be funnier.”

To which Michael replied:

But nobody demanded a refund.

Because then Michael added: “But … I can teach you how to tell a story. And that’s where funny comes from.”

We practiced many different kinds of storytelling in Improv 102.

For example, telling stories in a circle, with each person contributing one word at a time. (Which felt pretty weird.)

But my favorite story device was the 7-sentence story.

The 7-sentence story has made the rounds in Hollywood after a Pixar story instructor, Brian McDonald, spread the idea in a book.

(As it happens, Brian picked up the exercise from an Improv instructor in Seattle.)

Here’s how the 7-sentence story works:

You simply complete each of the following sentences:

“And ever since that day …”

The 7-sentence story makes it easy to tell a COMPLETE story with a full “arc.”

You get the stet-up — what “normal life” was like at the beginning.

You get a disrupting event, or the “tilt.”

You get the consequences of that event …

… and finally you see how life is changed.

And that is life in a nutshell – Change.

And that’s what most products promise, too … why else do we want a new product, a new service, unless we’re hungry for some kind of change?

The vid about the sad scarecrow, stuck making food in a factory.

That story is about change, and it follows the 7-sentence formula to a T:

Once upon a time, there was a factory worker named Scarecrow.

And every day, he trudged to his job where he churned out mass produced franken-food.

Then one day, he picked a ripe red pepper from his garden.

Because of this, he started hunting down more fresh food from his garden.

Because of this, he made himself a delicious meal and felt renewed.

Until finally, he brought his locally-sourced food to town and fed his fellow man, starved for something fresh.

And ever since that day, the world has been changing into a more healthy, hopeful place.

Interestingly, nearly half of the video is focused on the “Every day” part — the “life before” or the setup.

They’re really twisting the knife into the pain point — I love the part where the chicken is pumped full of unholy drugs in the dim, back corners of the factory.

This is a valid choice, especially when you’ve got a big, juicy enemy to attack — like the McFastfoods of the world.

Other times, you’ll spend more time on the consequences of the “tilt’ and get thrust along the journey.

But a story will only feel complete or whole with all those parts — especially a story about change.

Stumped for telling your story? Use the 7-sentence stems above to structure your tale. 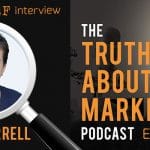 Ep 19: The Truth About Chris Farrell 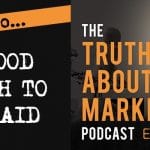 Ep 20: How To Be Good Enough To Get Paid