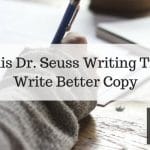 Most people do – the book by Dr. Seuss, that is. It’s the highest-selling Seuss book of all time, edging out The Cat in The Hat and other favorites. It’s sold 17.5 million copies since 1960.

That’s a lot of breakfast money for the Seuss estate.

But why is it such a stand-out?

One of the secrets to its success may be a simple writing tactic. A tactic that you can use to keep prospects glued to your message.

And, there’s even an online app that can help you make it work.

Seuss’s publisher bet him $50 that he couldn’t write a book using the 50 most basic words in the English vocabulary.

Seuss took the bet. It proved harder than it sounded. But he worked at it.

He grabbed those words and chewed them to the bone.

He squished and squinched ‘em. He mashed and mushed ‘em. He gobbled them up in the Seussinator and spat them out a few months later. Beginning thus: “I am Sam, Sam I am.”

(Confession: I don’t remember reading Green Eggs as a kid. But I vividly remember seeing the Reverend Jesse Jackson recite the book on Saturday Night Live in 1991, on the occasion of Dr. Seuss’s death. The startling clash between Seuss’s playful words and Jackson’s grave delivery was a gut-buster.)

Certainly one reason the book is so popular is that nearly anyone can read it. You only need to know 50 English words.

And, we can use this same storytelling technique – force yourself to use simple words –  to seize attention when we write sales messages.

You’re may be familiar with “readability” apps like Hemingwayapp.com. They compute something called “readability score” so you can target a basic reading level. (For reference, this blog post clocks in at a 4th grade reading level.) They measure vocabulary, grammar, and sentence complexity.

Apps like these are great, but there may be a simpler way to simplify your writing. We can take a page from Seuss’s book and simply limit our word list.

Here’s an online app that can help you by forcing you to write with the 1000 most common words in English: 5-upper.

Writing with this word limit can help in three ways:

This isn’t just because you’re “dumbing down” your message. I think it was John Caples who said something like “Some people are smart. Others aren’t. But even the smartest people don’t have a lot of time or attention for your ad. So make it as simple as possible.”

It becomes a game to you to be able to write without violating the rule. That gives you a goal. A tangible goal that’s straightforward.

That way, you may worry less about “is my writing good” which can paralyze your efforts to churn out a first draft.

I’ve found that if I can’t write something with simple words, then I don’t have a clear concept in my mind.

If you’re good with words, the problem becomes worse. Because you can use fancy language to pretty up a piece of writing without offering much of substance.

You know, polish a turd.

Of course, you may need to get fancy later. You’ll probably need more than just these 1000 words.

For example, I put Joe Karbo’s classic “Lazy Man’s Way to Riches” through the 5-Upper app and it flagged about 1 word in 5. And Karbo’s ad is a model of simple writing.

So, if you’re writing a muscle-building ad, you may need to change this copy, which only uses the 1000 most common words:

“Follow my steps to lift heavy stuff.  Then the parts of your body that lift things will grow bigger and harder. And it will do it fast, too.”

… to this better sounding (though less funny) copy, which uses forbidden words:

Anyway, the point is to get you to simplify, focus on essentials. Flourish comes later – if it needs it. Strip it down and build it back up.

The MORAL: First use simple words to write your sales story.  Then fancy it up if you need. 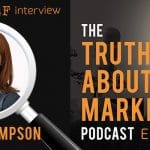