Warren Buffett’s name is magic when it comes to money.

In fact, Buffett’s business is buying other businesses.

He’s famous for not seeking out deals. You have to come to him.

But that doesn’t mean he doesn’t advertise.

Every year, Buffett sits down to write a sales letter for his company. It’s called the Chairman’s Letter, and it’s the center piece of the company’s annual report.

Sure, every public company issues an annual report, typically with a boring letter from the CEO. But Buffett’s letter is different.

His letters are conversational – even folksy – while still informative. He shows why Berkshire Hathaway remains a stellar investment.

They’re also chock full of metaphors, analogies, and wise sayings, from the Bible to Berra. He breaks down complex financial concepts into simple terms that anyone can understand.

In short, they have all the elements of a great sales letter.

And Buffett isn’t above hawking his own wares – on page 10 when he’s talking about subsidiary GEICO he writes: “… at least 40% of the people reading this letter can save money by insuring with GEICO. So stop reading and go to geico.com or call 800-368-2734.”

And while the Chairman’s Letter is selling the value of Berkshire to the shareholders – the literal audience – he knows that many, many people read BH’s annual report.

Including a lot of high net worth individuals. Tycoons who own businesses.

And someday, they may want to sell their business. Who they gonna call?

But money isn’t everything. Buffett knows that entrepreneurs have poured their lifeblood into their companies, and they want to find them a good home.

Plus, many owners may stay on as CEO’s. They don’t want to be under the thumb of a micro-manager. They want autonomy.

Buffett promises to give both these things. He says it point blank in his letter and public appearances.

But he doesn’t just rely on assertions to convince business owners. He uses the power of stories.

Take, for instance, the most recent letter in Berkshire Hathaway’s 2014 annual report. After his introduction, Buffett begins to take the reader through the different cash cows that the company owns. First on the list are the insurance companies, the crown jewel in Buffett’s scepter.

But here he does something strange – he spends three paragraphs telling the story of how Berkshire bought its very first insurance business back in 1967.

Why waste all that ink?

Let’s look at the story.

Here are the facts: In 1967, Buffett bought National Indemnity and its sister company, National Fire & Marine, for $8.6 million.

Fine – he could have just told us that. But Buffett goes on to dig a little deeper in his well of memory:

“Jack Ringwalt, a friend of mine who was the controlling shareholder of the two companies, came to my office saying he would like to sell. Fifteen minutes later, we had a deal. Neihther of Jack’s companies had ever had an audit by a public accounting firm, and I didn’t ask for one. My reasoning: (1) Jack was honest and (2) He was also a bit quirky and likely to walk away if the deal became at all complicated.”

Buffett goes on to write that because of Ringwalt’s “quirkiness”, they drafted a contract that was only 1.5 pages long and that no lawyers were involved.

Buffett has just sent a bat signal out to business owners who might be looking to sell.

His story is proof of what you get when you knock on Buffett’s door.

You won’t get hassle. You’ll be respected (for all your quirks).

And best of all – you don’t have to open up a vein to feed the blood-sucking lawyers and investment bankers. Kick those leeches to the gutter.

Okay, he doesn’t exactly say that. But you get the idea.

Buffett, consciously or not, is using storytelling to sell the value of Berkshire, both to investors present and those to come.

Stories don’t just work in ads. Any time you communicate with a customer, even in a non-selling newsletter or update, you have the opportunity to weave a story that sells your value. 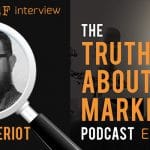 Ep 33: The Truth About Colin Theriot 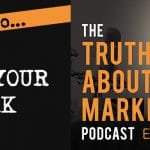