In the last post, I talked about how gossip grabs immediate attention.

The brain identifies a story as gossip if:

I looked at two headlines, from the Halbert-Carlton duo.

Now neither of these were actually scandals … but they did suggest a scandal by leveraging the above elements.

And this is important, because it shows us how we can use the attention-trigger features of gossip even if we don’t have a juicy scandal to relate.

Focus on the person or entity with the most to lose if a story gets out.

(Gossip is about reputation and dirty deeds.)

Let’s look at this deeper with an example – Gary Bencivenga’s olive oil ads.

Here’s the headline for an article lander:

First, it proclaims clear and loud that we’re dealing with a scandal.

Somebody is doing something bad that could seriously damage their reputation.

Incidentally, the headline also features a nice bit of serendipity with the word “virgin” so close to “scandal.”

… which means the Big Idea here is piggybacking on old fashioned concepts of sexual morality.

A bit of a stretch? Check out the subhead:

Is your “extra virgin” oil even a “virgin” at all?

Now, as enlightened as we are, the question of the “purity” of a bride is a very ancient intuition – and it

may well lurk in the minds of many readers, especially among the salt and pepper haired crowd.

After the headline, the lead dishes the dirt:

“Scientists at UC Davis went shopping at local supermarkets and brought back 14 of the country’s most popular imported brands to their labs for analysis. Incredibly, they found that 69% of the imported extra virgin olive oils they tested were fake, adulterated, stale, or so subpar that they failed to meet international and USDA standards for being labeled ‘extra virgin.’”

Now, this would be better gossip if it “named names” of a major olive oil company that was caught with its pants down.

But there can be drawbacks for this … like the eager legal departments of well-heeled corporations.

Plus, it may be good to have the “other” remain a shadowy villain, so the audience is left with the vague unease that no olive oil is safe – except for the product sold later on in the ad.

But the point is, the story has becomes more about:

“Did you hear what the big olive oil companies got caught doing?”

It’s not the only way the ad could have gone.

The hook could have centered around the product itself: fresh pressed olive oil shipped speedy delivery on jets instead of slow-moving cargo boats.

Or the hook could have been hung on the health benefits of extra virgin olive oil.

Both are important, and both are revealed in the body copy.

But for grabbing attention, Bencivenga relies on the brain’s attraction to controversy and gossip.

In you research, look for a person or entity who did something naughty … an event that might damage their reputation … a story that exposes a flaw that your product solves. 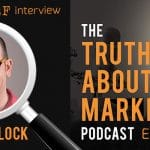 Ep 27: The Truth About Andrew Lock 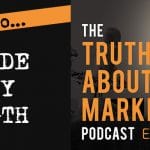 Ep 28: How To Decide Copy Length