How a Short Story Can Sell A Single Benefit

I went to a county fair last month. I love outdoor fairs. Mostly for the food.

To me, the prize doesn’t go to a sleek palomino horse or a purebred pup, but to the inventiveness of the cooks elbow-deep in the deep fryers.

(You should know that a clutch of paramedics stalk the fairgrounds.)

So, while I was wandering between stroke-ville and heart attack lane, I walked by an outdoor pitchman who reminded me of the power of a simple story.

You’ve probably seen those pitchmen … they invite you out of the sun to sit in a folding chair under a canopy. They stand behind a makeshift kitchen counter, a mic tucked into their collar, as they make a meal from scratch with a fabulous new device.

This pitchman, Phil, was hawking a line of cookware.

Phil wasn’t over the top. No Sham Wow. Just the opposite – he was matter-of-fact, personable, chatty. At one point he veered off into a tangent about the price he should pay for a “thirty ought six” rifle at Cabella’s. (We were in rural country and Phil knew his audience.)

But the thing that made me stop and listen was when Phil introduced a minor piece of the cookware set: a grate that catches fat drippings.

Here’s the gist of what Phil told us:

“This is the fat-free grill pan. [He held it up.] Now … when I first saw this attachment, I wasn’t impressed. Then Kathy, the staff nutritionist, told me, “Try it on a roast chicken, Phil.”

“I said, fine – it was my turn to make dinner that weekend at the house, and my wife and I needed a bunch of food because the grandkids were coming over.

“So I roasted the whole chicken we had in the freezer. Nothing hard, I just stuck it in the crockpot, added a few fresh herbs, and let it roast for 6 hours with this pan underneath it.

“After the timer clicked I pulled out the chicken – it smelled wonderful – and then I dumped the grease from the pan. Here’s how much it filled up. [He holds up a tall glass jar, filled to the brim with chicken grease] It got rid of that much. And the chicken still tasted delicious.”

There’s no big drama in this story. No earth-rocking revelations or life-changing transformations.

Instead, it’s a little tale that delivers a very simple point: the main benefit of the fat-free pan.

Phil could have simply told us the benefit. But instead he delivered the same information in a story.

It had characters: Phil and the company nutritionist.

It had dialog: a single line from the nutritionist.

It had a little arc: Phil wasn’t impressed with the pan, but then he tried it out, and voila.

The story turned on one simple benefit: the pan gets rid of fat.

And as simple as the story was, it engaged a different part of my brain.

It’s much easier to get a hearing with the Emotional Brain. (It’s a spur of the moment kind of guy.)

The Critical Brain, however, is already overbooked, overloaded with reams of data. You have to get in line.

So even if you don’t have an epic tale or one that’s bursting with suspense, you can still use stories to deliver simple benefits.

Narrate how someone used your product or just one feature for the first time.

It’s good to include:

The main point is that a story shows, rather than just tells.

Use a quick, simple story to convey the benefit of a product. Show someone using it for the first time. 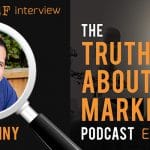 Ep 37: The Truth About Danny Iny 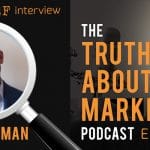 Ep 38: The Truth About Todd Herman