[Story Sells] How To Make Your “AHA!” Moment Believable with this “Dr. Strange” Magic Trick 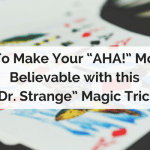 The latest Marvel blockbuster ‘Dr. Strange’ makes you believe in magic. To the tune of $653 million and counting. And one of the secrets of the believability is a little storytelling magic trick you may use in your next promotion.

We live in the Golden Age of Fantasy Movies. From epic fantasies like Game of Thrones to superhero flicks like The Avengers.

But with the success comes new obstacles. With each new marvel, the problems becomes making the jaded audience member believe. Slick graphics will only get you so far until people tune out.

So to win engagement, you have to use a more ancient bag of tricks to hook the audience. And ‘Dr. Strange’ knows how to solve that problem.

It’s the same problem we face when we tell a sales story and we come to the “AHA Moment” or the DISCOVERY in the 60 Second Sales Hook. It’s the moment we’ve all been waiting for – when you introduce the Secret Sauce, the Magic inside your insights, products, and services.

Dr. Strange will show us how.

After mangling his hands in a car accident, once-star surgeon Stephen Strange struggles to regain function in his fabulous fingers. It’s his only hope of getting his life back: his prestige, his money, and his very identity.

So near the beginning of the movie, there he is in a grueling Physical Therapy session, and he’s fed up with the PT giving him another “you can do it” rah rah rah Cat Poster speech.

I mean, this PT is barely educated. Strange went through the most grueling education you can imagine, probing the vast mysteries of the human body. And you’re telling me to ‘just do it’ and that will make it all better?

So Stephen lashes out, insults the PT. He basically says: your methods are weak and useless and you can’t save me. No one can.

Is the PT cowed? Hell, no. He’s not impressed by Strange’s anger. He’s not even moved by his pain. He’s seen it all before.

But he is irritated by Strange’s whining, and so he tells him, Yeah, Dr. Smartypants, I have seen a person with severe nerve trauma make a complete recovery. I ran into a former paraplegic shooting hoops not long ago.

Strange doesn’t buy it. But he’s desperate. So he searches out the patient’s files and ultimately confronts him on a neighborhood basketball court.

Thus launching Stephen Strange on the road to magical instruction in a faraway land.

Now, this Discovery Moment kicks off the magic of the film. And if the moviemakers had mishandled it, then we would never have become so involved in the story.

So what did they do right?

They used a CONFLICT scene to introduce the Discovery. So we didn’t look to closely for any holes in believability.

Instead of showing Stephen Strange sitting statically in front of a screen, searching for miracle cures (which would have been oh so boring), he’s force-fed the story from a pissed-off PT.

That way, we the audience are engaged in the conflict, and the Discovery just slips in. We’re under the spell of the action, so we don’t bat an eye at the (possibly hokey) discovery.

Call it the Strange Spell: reveal the discovery in the heat of conflict or some action.

This conflict could be an argument between you the product creator and the experts, say doctors.

Or, through agonizing trial and error.

And even if you have none of that, at least dramatize your search: you trudged to the computer, pounded on the keys in desperation, and anxiously scrolled down the page until your jaw dropped when you stumbled upon an obscure cure. Inject some drama into it.

As usual, for a great example we come back to John Carlton’s One-legged golfer letter. Here the golf expert is actually playing golf. He’s teeing up when he sees the one-legged golfer. The idea for a new swing then blasts into his brain.

Carlton uses the Strange Spell to transmit the discovery in the heat of action.

The MORAL: Use the Strange Spell to ease the Discovery into the sales message. 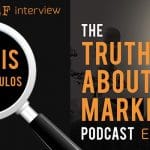 Ep 39 – Freelancers: Why You’re Not Getting Hired Pt 2 With Abbey Woodcock