The Bloody Roman Secret for Gluing Eyeballs to the Screen

Here’s a story for you:

“This morning I woke up and hopped in the shower. In the middle of the tub lay my green washcloth.”

Nope — not unless you need help falling asleep.

A story isn’t just a string of events, one after the other.

No — for a story to demand our attention, something needs to happen — but what?

In Improv class, my instructor called this event “The Tilt.” (Also goes by the name “inciting event” in screenwriting 101.)

Before the Tilt, events are plugging along like normal in the story … but then the ground gives way underneath.

It’s the moment when you let the lions escape into the arena.

(You can bet that kept the masses in their seats, eyes hooked on the unholy gore-fest about to flow.)

… and makes us want to read more, find out what happened.

So if instead I tell you:

“This morning I woke up and hopped in the shower. In the middle of the tub crawled a rat the size of a Chihuahua.”

Now we’ve got a story … because something disruptive has happened.

(A story of two kids jumping on the bed is boring. But when one of them jumps up and hits the Ceiling fan …)

In The Lord Of The Rings (novel, not movie for gawd’s sake), the Tilt happens when Frodo learns that his piece of shiny gold bling belongs to the badass gangster from Mordor — who wants it back.

This event (a discovery) occurs early on the book — the second chapter — and it kicks off the entire adventure.

It’s the part of the story where things go wrong.

Makes us perk up our ears.

One night, Chris finds himself in a nightclub filled with fight-happy skinheads.

(This fact is established in the Setup of the story.)

There’s a hint of danger already. Brewing suspense as Chris buys a beer and looks for a table.

But the Tilt doesn’t happen until Chris walks by a skinhead and does something that changes the story and sets it in motion.

Here’s how Carlton tells it:

“…as [Chris] passed a table of [the skinheads], he reached out and good-naturedly rubbed one of them on the scalp.

Carlton has already established that the skinheads are mean — “These Sick Jerks Actually Enjoy Hurting And Humiliating People!” — so when Chris gooses one of the skinheads on the noggin, we catch our breath for the beating that’s about to come.

Now you’ve got a story on your hands.

Keep in mind, the Tilt doesn’t have to be all blood and guts — it often involves your hero’s first brush with danger, but it could be a discovery instead.

Both discoveries and danger can throw our lives for a loop.

Bud Weckesser used a “discovery Tilt” in a weight loss offer with the killer story headline:

“When my skinny doctor laughed at me, I threw my dress in his face …” (See the ad at the goldmine Swipe site)

First, the story sets up the life of the hero – the first person narrator is overweight and suffering from it.

And she’s tried all the diets. 14 of ’em and counting.

But then comes the Tilt — her doctor introduces her to something new that disturbs her ordinary life.

From the fifth paragraph of the ad:

“My doctor listened carefully and recommended an entirely different program. This wasn’t a diet. It was a unique new weight-loss program researched by a team of bariatric physicians — specialists who treat the severely obese. The program itself was developed by James Cooper, M.D., of Atlanta, Georgia.”

This Tilt is then paid off quickly (“during the three weeks that followed, my weight began to drop. Rapidly.”)

Again, just like in Carlton’s combat tale, the setup to the story is critical — the hero has tried everything before. She feels defeated. So the personal advice of the physician is like a ray of sunshine.

This is a “positive” tilt — but just like a “danger” tilt, it creates curiosity because it throws something new into the life of the character.

And that’s when we grab our popcorn close and wait to see how the hero survives.

Right after the setup of your story, sustain your reader’s interest with a “Tilt” in the ordinary life of your hero 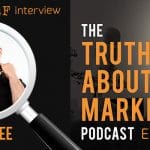 Ep 5: The Truth About Ryan Lee 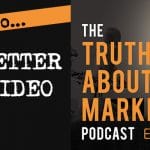 Ep 6: How To Sell Better With Video