If you had to tell me your story right this second, would you be able to do it … or would you choke?

You’d think it’s easy explaining who you are and why people should care. But if this were true, nobody would need copywriters.

Bad storytelling means we risk confusing or boring people … and then we never hear from them again. That’s how you bleed money.

Happily, good storytelling can be as simple as following an easy formula shared by all great stories.

In fact, instead of relying on guesswork, imagine your next sales letter as a story like “The Hobbit”!

An introduction has to grab your audience where they’re currently at.

For example, Bilbo Baggins is the everyman hero, but he doesn’t WANT to be a hero. He wants to stay home, mind his own business, and host tea parties.

But (secretly) he has a thirst for adventure.

Problem is, he’s a practical person who doesn’t believe adventures are good for you. And he’s a scaredy cat. No, sir, he’s better staying at home where it’s safe, thank you very much.

What about your prospects? They don’t care about your product right now. They’re too busy wondering (for example), “How do I become an authority figure so people start listening to me?”

Tell them that in your headline! Write like these people think, and speak directly to their current mental state. This is how you get inside their head.

Lay out the problem in detail. You’re pulling back the curtain and showing people exactly how they’re struggling and (most importantly) WHY. You’re like a doctor making a diagnosis.

Gandalf the wizard shows up, and he’s a prick. Says he’s looking for someone to help him with an adventure. Oh yeah, and there’s a murderous dragon and lost treasure.

Bilbo’s not interested because (as we’ve established) he’s terrified of his own shadow. Plus, adventures makes you late for dinner.

Naturally, Gandalf ignores Bilbo’s protests and invites an entire football team of dwarves to Bilbo’s house, where they raid the kitchen and break his dishes. Gandalf obviously went to college and understands why you always host the party at someone else’s place.

But that’s not the worst of it. Bilbo discovers the problem is a million times worse than he thought!

You see, the main problem is obviously the dragon.

But before they even reach the dragon, they’ll have to cross miles of hostile territory filled with orcs, trolls, and spiders the size of Lincoln Town Cars.

There’s no restaurants in hostile territory either, which means there’ll be no dinners.

Bilbo is like, “This is bullshit. I hate my life.”

You lay out the problem in your sales letter too, by describing the problem for your readers. You need to talk about what they’re experiencing: “Do you ever wonder …?”

“Do you ever wonder how the people you admire and respect the most in your field got to where they are?

Or what it takes to get invited to speak at the most prestigious conferences? Or CNN? Or Oprah?

Or how to deal with feeling like an imposter (even if you’re good at what you do)?”

Your audience’s MAIN problem might be they don’t have a network, yes.

But their supplemental problems may include shyness, imposter syndrome, excuses like “I don’t have enough time”, not knowing what to say or how to say it, procrastination, or analysis paralysis. You’ll know from chatting with your market.

The problem might also be no one ever taught them how to play the game. Unless you’re already an authority figure, you won’t naturally know the rules. You need to hang around these types of people to learn them.

Tell your audience all of this!

You’re accomplishing two things here: first, you’re showing you understand them, so they start nodding their heads and trusting you.

Second, you’re establishing yourself as an authority and they’re curious to hear what else you know.

As the story continues, we get a sense of why Gandalf wanted Bilbo on his team, and why the prospect should get you on theirs.

Bilbo is small, but he makes up for it with stealth. He’s smart and brave, but he doesn’t lose sight of his compassion for the worst characters. He outwits everybody. By the end, he’s helped slay the dragon, recovered the lost treasure, and returned home a hero.

In your sales letter, explain who you are and why you’re equipped to solve this problem. Why do you care about this problem in the first place? What’s your experience here?

Bilbo boasts of his successes by calling himself Thief and Barrel Rider. Your proof might include awards, media appearances, and numbers of email subscribers who take your advice every week.

But if not, your proof might be as simple as sharing your own struggle with this problem and how you overcame it.

Notice how we’ve been including emotion in our story the whole time?

You can feel Bilbo’s frustration: at the dwarves, at being away from home, at facing down monsters. Your reader feels frustration as you describe their situation and the truth behind what’s holding them back. There’s a lot at stake here.

People rarely remember facts. They will always remember how you made them feel. And that’s key to any good story. Emotion forces your audience to care.

Notice how, as you’ve been discussing the problem, several things naturally happen:

You slowly reveal the solution. Gandalf’s solution is to kill the dragon. You suggest a product that helps prospects meet VIPs.

You’re painting a brighter future. For Gandalf and company, it means no more dragon, the dwarves restored to their homeland, and gold for everybody.

For your prospects, it could mean … what? Better career opportunities? Instant brand recognition? Incredible speaking gigs? Tell them, and be super specific.

If you don’t know what they want, stop the presses and find out immediately. Your success hinges on it.

You’re making a promise. Now you’re actually making a covenant with your prospect, as a trusted expert protecting their client. Gandalf promises Bilbo an adventure. You’re promising to help make the prospect into an authority figure with powerful friends.

Warn people what NOT taking action could cost them in the long run.

As a trusted expert, it’s your job to warn them of the path ahead. This means telling them why they need to take action NOW. What are they really risking if they fail here?

Failure for Bilbo means death and dishonor. The dragon keeps the gold and terrorizes the countryside. The dwarves never regain their lost home. Bilbo never gets to be a hero and spends the rest of his life thinking he’s a loser … assuming he survives.

Failure for your audience means a lifetime of mediocrity, millions of dollars lost, never realizing any of their career aspirations or getting to share their gifts with the world. That sucks.

What could waiting another year mean for their dream? “Oh, I’ll do it later.” They already said that three years ago!

If they don’t take action now, they risk never slaying their dragon at all … ever. And that’s a tragedy.

Once you’ve made your case, there’s a natural denouement to the emotion and urgency of your story. Here’s where you wrap things up with final details and a FAQ (if applicable).

Don’t allow a failure of the last mile: make sure your shopping cart is simple to navigate so people can just point, click, and give you money.

Phew! And then you’re done!

So, how do you know your story makes sense and will capture the reader’s interest?

Here are questions to ask when reviewing copy:

Did you show proof? Testimonials are critical, but don’t forget the importance of sharing your knowledge and personal experience. People are curious to know who you are, and they’re more interested when they know you’re invested in the outcome because of your own experiences.

Carolynn
Carolynn Ananian worked on Wall Street and mixed drinks in a bar before she became a direct response copywriter. Today she helps companies clarify their branding and deepen their relationship with customers through better storytelling, especially in the personal development and education niches. You can contact Carolynn and learn about telling good stories at cananian.com. 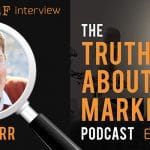 Ep 58: How Freelancers Jump To The Next Level (Without Burning Out) with Pete Michaels