I’m watching The Crown on Netflix.

The show follows the beginning of Queen Elizabeth II’s reign in the 1950s.

If you’re into period dramas and stuffy British manners, it might be your kind of thing.

But for me, it looked like a bit of a snooze fest.

Nonetheless, I’d heard it was good, so I gave it the old Netflix try …

Well, I kept watching. And one of the reasons why is because The Crown exploits a storytelling trick you can use to build inherent curiosity in your story.

I didn’t keep watching because the show is quality, though it is. Good acting, spot-on production design, the works.

And I enjoy learning about history.

But there was something else about it that kept me watching (I’m halfway through the series so far.)

The Crown’s secret sauce is built right into the name of the show. It’s very simple …

The show is about ROYALTY!

Kings and Queens. Lords and Ladies. Ministers, both prime and sub. The Big Men and Women of society.

We humans are fascinated by such people. We want to know what the powerful, the rich, are doing.

They must be doing something right, says a primitive part of our brains.

Even if we scroll through such stories simply to scorn, we’re paying attention.

So whether we watch to mock or model, we’re drawn to tales about the magnificent.

I mean, the British tabloids would probably go bankrupt if the British Crown was ever dissolved.

Yes, we live in an era of a democratization of storytelling, where many people want to see “ordinary people” …

But with apologies to Howard Zinn, the Big Kahunas are just more inherently interesting.

So if you can, use a “Royal” in your story: Any shining person that stands out – whether by birth, wealth, superior ability, or celebrity.

Now, if your sales story doesn’t have a “Royal”, what do you do?

You could hire a celebrity to endorse your product. But if you don’t have that in your budget, you still have options.

Think like a pirate and plunder history. There be crown jewels to be had, matey.

As a random example, look up “G” in the history books …

Perhaps Gandhi did something similar to what your product or service offers. Maybe he knew a trick about human psychology that you help teach. Or a simple dietary rule.

Or, on the other side of the violence spectrum, you could pick Genghis Khan. What were his secrets to power?

Or for even more fun, pick a trick that both Gandhi and Genghis did. Maybe they both did something that unlocked the keys of power.

Then your story would have triple the grabbing power: Two Royals plus a Contradiction. I’d call that a storytelling full house right there.

(It pays to be a history nerd.)

MORAL: So crown your story with the “Royal Treatment” to build in immediate curiosity. 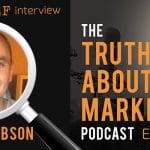 Ep 109: Robert Gibson – The Truth About Giving Your Best