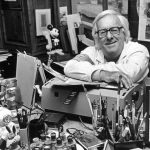 Ray Bradbury fumbled his early stories. They took him a long time and were boring to read.

Until in his twenties he stumbled upon a “trick” that gave him an endless supply of story ideas … giving us Fahrenheit 451, The Martian Chronicles, and creepy tales like Something Wicked This Way Comes.

With this trick, he could pump out a short story in a single morning.

And, it’s a trick that can you can use to increase not only the speed you write copy – but the speed your audience reads it. I’ll explain what I mean in a moment.

But first, let’s peer into Bradbury’s secret for storytelling. Here’s how he put it in the introduction to one of his short story collections, The October Country:

“I fell into becoming halfway excellent by the sheerest of word-association accidents. When I was twenty-two, I began to make lists of nouns to try to jar my subconscious into sitting up to beg for delivery. It didn’t work until one hot noon, when, sitting in the sun with my portable typewriter, I wrote this: The Lake [which] has never been out of print.”

“From that day on I began to pay attention to the right, left, or perhaps lop side of my brain. I found that I could provoke memories of odd notions or strange metaphors by listing my favorite nouns…”

Bradbury would scribble nouns that sparked a feeling in him. Nouns like “THE NIGHT, THE ATTIC, THE RAVINE, and DAWN ARRIVAL OF CIRCUSES.”

When he combined these, rolling them together in his mouth, they gave birth to tales of wonder.

And it can be the same with good story copy. Just start with the words. But where do you find these?

But another stock of words can come from your research, like on forums or Amazon reviews of books similar to your offer.

Now, Bradbury generated nouns, and nouns are great. They’re the stuff of thought.

But if you lust to forge fast-paced story copy that thrills the reader into action, then you’re gonna want to coax a different part of speech: the verb.

Specifically, the action verb. A word that conjures up a vivid action that you can see in your mind’s eye, like TWITCH or THRUST.

And not just any action verbs, but verbs that ignite emotion, baby, what John Carlton calls “power words” like HUMILIATE and AMBUSH.

Action verbs trigger a lively scene of action rather than suggest a tepid state of being (like “is”) or a limp reception of action (like the passive verbs “was overlooked.”)

Again, you can seize these words from your research. Here are a few action verbs I spied for a recent health piece I wrote, after scouring several forums:

How do those words make you feel? Can you see how a simple list like this can jump-start the right mind-set to crawl inside the brain of your audience?

Not only that, but when you plop these juicy words onto the page, your story copy reads faster. Action verbs are like rapids in a river, injecting a burst of speed to a tired reader.

Forums aren’t the only place to source action verbs. You can hunt ‘em in the pages of master writers, too.

I discovered one unlikely source for blood-boiling, heart-thumping action verbs: Stephen Pinker’s book The Stuff of Thought, which probes the boundary of language and thought.

What? A book peddling a dry-as-dust subject like linguistics? Yep, and Pinker has to work double-time to keep his academic subject compelling. And since he cracks open words to see how they tick, he’s got plenty of ammunition to arm himself with.

Because Pinker isn’t just an investigator of language, he’s a master at wielding it, in particular the action verb. He grabs these eager puppies by the tail and tosses them at you from every page.

Here’s a sample from a discussion on passive verbs, the evasive cousin of the more direct action verb.

“Though causative constructions ordinarily FINGER a guilty party, they can JETTISON their subject when expressed in the passive voice. That makes the passive a convenient way to HIDE the agent of a transitive verb and thus the identity of a responsible party, as in Ronald Reagan’s famous non- confession ‘Mistakes were made.’”

But see the way Pinker keeps you awake with verbs like FINGER, JETTISON, and HIDE. These action verbs trigger visual images to blossom in your brain.

And so should good story copy. Stories, after all, are about what happened, not what is. And action verbs, like a golden linguistic key, unlock the vigor of a rousing event.

Scratch out a list of action verbs to kick-start your sales story. 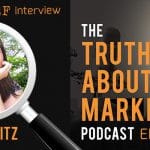