[Story Sells] Sell On Emotion, Justify With This …

My nephew recently asked me how The Flash got his super-speed powers. My answer:

“Barry Allen was struck by lightning while standing in front of a shelf of chemicals. The combination of the chemicals and the lightning gave him super speed. Lightning is very fast, after all.”*

This story made sense my nephew. Lightning is fast, so if lightning goes into your body, then you become fast, too. Clear logic.

Yes, the facts may not be true.

In Super Hero-speak, we call this an Origin Story.

Origin Stories are so important to super hero tales – or any fantasy tale – because we want to believe that people can fly.

So we can’t just say, “One day, Clark Kent flew.” We have to see that his Kryptonian cells are supercharged by the light of our yellow sun. We know it’s not real, but our brain still hungers for a plausible explanation.

There’s another name for this kind of Story – a “Just So” story.

Like the kind told by Rudyard Kipling. His “Just So” stories explained features of the natural world. How the tiger got his spots. Why whales only eat small creatures. And so on.

(The name comes from the fact that Kipling’s daughter demanded he tell these stories exactly the same way every night: to tell them “Just So.”)

Why do we get a kick out of these stories?

Like I said, our brains light up when we hear an explanation. We all want the world to make sense. And when a story wraps up that explanation in a pretty package with a shiny bow on top, our brains shiver with pleasure at the gift.

That’s why it pays to have a “Just So” story in your promotion.

Or Mark Twain’s dictum: A man buys for two reasons. The real reason and the reason he tells his wife.

A “Just So” story provides this reason.

When we tell these stories to ourselves or others – like our spouse – we have a perfect “Reason Why” the purchase wasn’t another dumb idea or rash purchase.

So when a marketer tells a story that explains why these things are true, we start nodding along.

The stories should be fairly simple and follow a clear line of logic, even if the facts are more complicated.

“This Diet works because our bodies evolved to eat this way. Homo Sapiens evolved over several hundred thousand years to eat a specific kind of food. Grains were only introduced in the last ten years, after evolution had stopped. That’s why a grain-based diet is bad for us. Just like you can’t expect a tiger to eat lettuce and not get sick, you can’t expect humans to eat a modern processed diet and not get sick. “

This story follows the logic of evolution: a creature adapts to its environment over time. It makes sense, even if the details are rather more complicated.

Even the famous 1960s tag-line of Avis Rental Car is a miniature “Just So” story: “When You’re Only Number 2, you try harder. Or else.”

“We work harder because we’re second” explains the reason for their superior service.

A “Just So” story can be extremely quick. It helps, though, to put it into the framework of a story. One of my favorites is for James Dyson’s original vacuum cleaner.

The tagline for this newfangled device was “a vacuum that never loses suction.”

But by itself that was just an empty claim. What made it true was the origin story behind it. Here’s how I put it:

James Dyson got frustrated every time he had to vacuum. His vacuum lost suction the moment it began filling up with dust. To his engineer’s mind, this was woefully inefficient. But he couldn’t see a way around it.

Then, one day, he was walking by a lumber mill and was struck with a sudden insight. When the lumber was cut into boards, a huge spinning cyclone sucked away the tons of saw-dust. And the cyclone never lost suction.

If a cyclone could do that for a saw mill, why not for a vacuum?

Easier said than done. Dyson spent the next several years (and racked up hundreds of thousands of dollars in debt) developing one prototype after another, ultimately plowing through 5,127 versions until he struck upon his masterpiece: The Dyson Vacuum, powered by Cyclone Technology. Now he has a vacuum that never loses suction, and so can you.

This “Just So” Story gives proof and a reason-why the vacuum works. We say “a ha, that’s why it works. He stole a good idea from something else and applied it here. Like any good inventor (or artist).”

The Moral: Tell a “Just So” story to justify why your product works, or is better, or is a great deal.

*(For nerds only: This story explains how the Silver-Age Barry Allen Flash got his powers. For Jay Garrick and Wally West, the answer is, of course, different.) 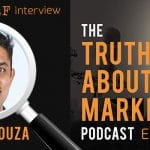