Last post, I said you should pick one theme for your ad.

Fine. Now that you have it, how do you make it punch?

Let’s see how Hollywood does it.

Ever seen Saving Private Ryan? The film cleared nearly half a billion dollars in ticket sales, neatly earning back its 70 million dollar production budget with a few pennies left over.

Tom Hanks, Steven Spielberg, and World War II – the movie had a lot of hooks working for it.

But one of the reasons for its success surely lies in the very clear goal of the hero, Tom Hank’s character: to save Private Ryan from the dangers of the Normandy invasion and bring him home safely. (Heck, the goal is right in the title!)

Every story needs a hero, and every hero needs a goal. Throw in some pushback against the hero’s efforts, and you have the basic spine of a story. (Hero + Goal + Conflict == Story.)

But not just any goal will do.

The best goal is clear and visible. Literally visible – if an outside observer can see you achieve it, you’ve hit gold.

(Hollywood Script Consultant Michael Hauge taught me the importance of this. I met Michael after attending his and Andre Chaperon’s “Storyfluence Academy”, where Michael distilled his knowledge of successful screen stories into a comprehensive formula that marketers can use.)

Consider this goal, one we might see in a dating product: “I want ladies to think I’m attractive.”

Versus … “I want Jennifer, the hot girl in the breakroom, to say yes when I ask her on a date.”

It’s the difference between a fuzzy, out of focus picture and a sharp, well-lit shot.

Why does it matter? Because a clear goal creates clear stakes. We the audience know when the hero is succeeding and when he is failing. And so does everyone else in the story.

(By the way, life mimics art here. Life coaches urge people to do the same thing. Instead of saying “I want to be a better father”, which is noble but vague, say “I want to stop yelling at my kids when they misbehave.” You’ll know exactly when you succeed at the second goal – the first one, not so much.)

When you give your hero a clear goal to pursue, your audience won’t get confused. They know exactly what’s going on … even if they don’t know how the hero will get there.

Better yet: a clear, visible goal sets up automatic suspense – that nervous desire to see what happens next.

It just needs to raise the question: what will happen in the end?

In the opening seconds of the ad, we learn that Jeff Gordon and Pepsi have been accused of shooting a fake commercial – specifically, their previous viral hit, in which Jeff test drove a car off a lot, taking the salesman on a wild ride.

Fake! clamored the internet. The salesman was an actor – he wasn’t really scared by the test drive.

One persistent critic was the automobile blogger Travis Okulski.

So Gordon & co hatched a plan, they tell us: disguise Gordon, who then picks up Travis, and takes him on the ride of his life. And watch how he reacts.

Right there, they give us the visible goal of the story: either Travis will genuinely be scared witless or he won’t – we’ll be able to see it on his face.

Will Gordon pull it off? Once you start watching, you won’t want to look away until you find out. (I found myself watching Travis’s face and body language very carefully.)

This is a brand awareness ad, so it’s designed not to sell a benfit but an identity emotion. (It uses the metaphor of Gordon in disguise to represent the concept that Pepsi Max is a zero-calorie cola “in disguise.”)

Okay, I get it. Doesn’t make me want to chug down a soda – but at least I did feel more positive about Pepsi … so this brand ad accomplished its marketing goal.

Create a clear, visible goal for the hero of your sales story. If an outside observer can easily tell whether the goal has been achieved, you’ve got yourself a winner.

Learn more about using the power of stories in marketing in Scott’s marketingwithstory.com. 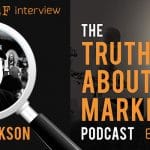 Ep 1: The Truth About Dean Jackson 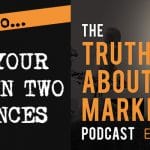 Ep 2: How To Tell Your Story In Two Sentences