The “Eyebrow Test” for Sales Stories

Let me tell you about my first lesson in marketing. (It was painful.)

See, when I was a kid, I wanted to be in pictures. The moving kind.

And one windy day in Chicago, I got my shot: an audition for a bona fide major network TV pilot.

My parents signed me up and we drove into the city for the day long affair. Of course, my three brothers came with me.

That would prove to be a terrible mistake – for me.

Because the very first part of the audition process had nothing to do with talent.

The auditors didn’t ask us to memorize a page of lines. (Woulda been a breeze for me.)

They didn’t ask us to emote on cue. (Yeah, I could do that too. Audience, hear me roar.)

Heck, they didn’t even ask us to read a single line of dialog.

Nope. The very first “test” of my abilities came when the auditors asked me and a bunch of kids my age to sit in folding chairs in a big room.

Then the auditors cast their glance over the lot of us.  And made their first cut.

I didn’t make it.

I was smacked by the rejection, for sure, but I was also stung by the unfairness of it. How could they dismiss me without asking to see my talent? Didn’t they care that I could actually act?

And what’s worse, they didn’t care at all for a nine-year-old’s tender feelings of jealousy. Because the person they did pick was my very own older brother.

A brother who preferred throwing around a football or fiddling with a ten foot length of orange electrical cord than memorizing a bunch of pointless lines.

But, you see, my brother also sported a cute crop of fuzzy tight curls on his head and a brace of dimples on his cheeks that blew the needle off the cuteness meter.

In other words – he was the “type” they were looking for.

That was my first lesson in marketing:

No matter how good you think your “product” is …

What matters is what your audience wants.

And the same is true for ads. That’s why we split-test headlines, hooks, and angles.

And it’s also true for the stories we use to sell.

Just because a story resonates for us personally don’t mean that anyone else will connect.

How do you know what works? I suggest using the “eyebrow test”.

The “eyebrow test” is simple. Simply dust off a few of your stories and throw them at your friends, families, barmates, or the dude inking your tattoo.

Then, watch their eyebrows.

Do they stay flat and level as a tabletop? Bad sign.

Or … do those forehead warmers damn near jump off the scalp?

(Maybe even accompanied by an outburst of: “Really?”)

If you get the latter, you know you’ve got a story that interests other people.

You can keep it simple, too – just by putting your story into a question like: “Did I ever tell you the story about ….” and complete it with the hook from your tale.

“Did I ever tell you the story about how a one-legged golfer out-drove his two-legged opponents?”

“Did I ever tell you the story of how a dead-broke standup comedian discovered a million dollar sales tactic hidden inside a standard joke formula?”

That’s the story of how Kevin developed the 60 Second Sales Hook, which, by the way, is a great way to package your tale into a bite-sized chunk. Perfect for the “eyebrow test.”

Speaking of 60 Seconds, in-demand Hollywood “script doctor” Michael Hauge wrote a book called Selling Your Story in 60 Seconds. Although it’s geared for screenwriters, Hauge’s book teaches you how to pitch the most intriguing chunks of your story when you only have a minute.

(Hollywood has a shorter attention span than a six-year old boy high on a box of Thin Mints, so Michael helps you make those seconds count.)

Now, it’s certainly best to pitch your story to a potential prospect. But the best of stories will light the eyes up of just about anyone. Who wouldn’t want to hear the tale of how a one-legged golfer beat the two legged-pants off his buddies?

Before going to press, try your stories out on friends and families. Let their eyebrows be your guide. 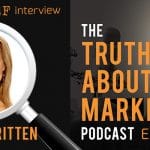 Episode 53 – The Truth About Conquering Fear with Rhonda Britten 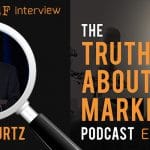