Want to engage your audience with story — but without breaking a sweat?

We talked about the extreme short story, the parable. Parables make storytelling easy because you don’t need any fancy description or back story.

But today I’ll share the easiest and fastest form of storytelling of all. When done properly, you can tell it in as few as 4 seconds.

Call it a “micro story.”

Also known as an analogy.

(A Hat Tip to fellow Chief Nathan Dye for introducing this idea on Copy Chief many moons ago, which members can access here)

Analogies, or metaphors, compare one thing to another. They introduce new ideas by comparing them to familiar ones. Which is why advertisers reach for an analogy when they have to introduce a new product or feature.

The analogy or metaphor distills the essence of a new concept into something familiar.

The ancient Greeks understood this. Their word “metaphor” has two parts: “phor” which means ‘to carry’, and “meta” which means ‘across’.

So we can think of an analogy or metaphor as a shot glass of distilled meaning that I pour for you.

I’m reading a book right now called Shortcut by a former (Bill) Clinton speechwriter that waxes on the persuasive power packed in a tidy little analogy.

In the ad, we see a great big bear shambling through the woods.

A narrator tells us that some people believe in the bear and some people don’t (but because we can see the bear on the screen, it’s pretty clear which people are right.)

Suddenly, the bear stops in its tracks.

Blocking the bear’s path is a lonely hunter on a hill, a rifle slung across his firm shoulder.

The bear slowly backs off as the narrator wonders aloud, “Isn’t it good to be as strong as the bear? If there is a bear?”

The ad ends with a smiling picture of The Gipper with the tagline: “President Reagan: Prepared For Peace.”

The U.S.S.R is the bear. It may or may not be dangerous.

President Reagan is the hunter who wields a rifle. The rifle is shouldered – but he’s prepared to use it if necessary. That’s why the bear backs off.

We get the point immediately. Why?

First, the analogy is visual, so our perceptual brains grasp it instantly. No need to untangle a complicated description using our more critical gray matter.

And it’s simple, so it’s easy to remember. If something dangerous is on the loose, it’s a good idea to be prepared: “Better to be safe than sorry.”

And last, it nicely sums up Reagan’s chief “selling point”: he doesn’t want to go to war, but he’s ready to kick ass if he has to.

Like another political analogy: “Speak softly but carry a big stick.” This from another tough-guy U.S. president who actually hunted bears. And then stuffed them.

The testosterone is getting pretty thick here, so let’s cut through it with a summary:

2) It sums up the relevant idea or selling point

3) It’s simple, so your audience easily remembers it

The “Bear” analogy nails all three.

And you can watch a good example of analogy in in advertising in this vintage Colgate toothpaste ad.

Colgate dramatized their special ingredient “Gardol” with the analogy of an “invisible shield.”

In the ad, the announcer stands on a tennis court when some jerk wad fires a tennis ball at his direction.

But just as the tennis ball is about to smash the announcer’s pearly whites, the ball is deflected by an invisible shield.

“Now, just as I was protected by this invisible shield …” — the announcer pauses to knock on the transparent glass behind him — “Colgate with Gardol forms an invisible protective shield around your teeth.”

This analogy of an invisible shield:

1) Is Visual (We see the tennis ball deflected.)

2) Sums up the idea (Gardol shields you from tooth decay. And it’s invisible, so your smile is on full display.)

3) and is Simple (Everyone knows how a shield works.)

Sure, it’s good to go into the science-y mechanism of what makes Gardol so powerful (to satisfy the skeptic), but audiences will remember the visual image long after they’ve forgotten any jargon.

Use micro-stories – Analogies – to visually reinforce your main selling point, so the benefit will be easily grasped and remembered. 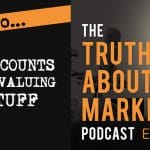 Ep 49: How to Offer Discounts Without Devaluing Your Stuff 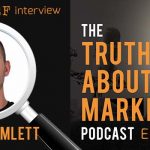