How to Infect Your Readers with the “Trust Drug”

When I was 19 years old – the age of a man’s sexual peak, I’m told – I watched a play about inappropriate touching.

The play unfolded during a religious retreat meant to mold young minds. And to show what proper behavior was.

Case in point: on stage, a teenager began to give the another a backrub.

“Oh man, my shoulders are sore,” says the girl. “Guess that calculus quiz really stressed me out.”

“Sorry to hear about that,” says the teenage boy. “Uhmm … how bout I gave you a back massage?”

“Really? You don’t mind?” she says, batting her eyes.

The narrator paused the action right there. Such behavior, he said, was “easy familiarity” – and could lead to other things. A slippery slope down the back.

Roll your eyes if you like, dear reader, but I know of at least one innocent backrub that led to other activities.

And that may be because touching, like in massages, has been shown to unleash a bonding hormone called oxytocin.

You may have heard of oxytocin before – it’s been slapped with squeeze-worthy labels like the “cuddle hormone” and “love drug.”

Oxytocin floods a mother’s body when she hears her baby gurgle and coo, helping to bond the two together.

And a study on backrubs showed that oxytocin hits your brain when your back is kneaded and squeezed … even when it’s a stranger doing the squeezing!

And study after study show that an oxytocin-addled brain is a trusting brain. If someone squirts oxytocin into your nose, you become more trusting.

But here’s the catch …

It turns out that oxytocin only bonds us to people in our group, as I learned from Jonathan Haidt’s revealing book on morality, The Righteous Mind.

A study of Dutch men confirmed this. The Dutchmen, after exposed to oxytocin, trusted people on their “team” more, but didn’t feel like embracing outsiders.

So – what does this matter for you?

Well, it doesn’t take an educational skit to convince you that your prospects are more willing to buy from you if they trust you.

So if you could soak your direct mail envelopes in oxytocin, you’d be half way there.

But don’t go dusting off your chemistry set. ‘Cause you might get the same bang for your buck by telling a good sympathy story – a story designed to send us rushing for the kleenex box.

Stories about people suffering can boost oxytocin levels in viewers.

So when you tell a sob story to your prospect, you may well boost his oxytocin levels.

But – because O-T will only nudge him to trust a member of his own tribe, you better make sure that you are part of that tribe. Or that hormone dump will be wasted.

Well … not wasted. Let’s just say redirected to those closest to him, instead of to you.

(Though this could be to your advantage. True Move is a Thai phone company that tells heart-wrenching stories in their commercials. After you watch their tear-jerker, you might be more willing to rack up some long distance minutes on your phone plan. (Evidently, these kinds of commercials are a hot trend in Thailand. Check out the WSJ article below. The internet being what it is, people now watch these commercials and try not to cry as sort of contest.)

The good news is, people nowadays are part of lots of groups. You can build a common bond around any identity you share.

That’s why an origin story is so powerful, where the product originator has faced challenge after challenge and suffered – just like you have. A good origin story can combine suffering and group opportunity into a double-punch combo. 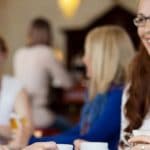 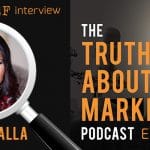 Ep 52: Sacha Lalla – The Feminine Fueled Future of Marketing with