Many business owners I know cower at the prospect of emailing their customers.

If they don’t have something to sell, they’re not sure what to say.

When they do have something to sell, they don’t want to annoy them.

And if they have any type of subscription model, they’re afraid an email will only serve as a reminder to cancel for some customers.

Yet if I were to ask you to skim through your inbox over the past few days, I’d bet you would find at least one company whose emails you always look forward to.

I’m a sucker for SumoMe emails

So how the hell do they do that? How do some companies send email that you not only want to read, but that also make you consistently want to give them even more money?

Unfortunately, your customers will most likely not be using your product 24 hours a day, so you won’t always be the number one thing on their mind.

That’s where email comes in. Email allows you to:

All three of these types of email are opportunities not just for increasing sales, but for increasing delight. And when you figure out how to send emails that delight your customers, you get results like this: Yes, you’re reading those numbers right. Here’s a quick recap while you pick your jaw up off the floor:

For a list that large, these results are practically unheard of. Most businesses would kill just to achieve 50% of these numbers.

If you looked closely (or read the title of this post), you already know that the evil geniuses behind this campaign are the makers of Cards Against Humanity, the self-proclaimed “party game for horrible people.”

I’ve long been a fan of their emails, but didn’t realize how passionate other customers were about them until I saw those campaign numbers in a blog post (below) MailChimp wrote about them.

So how does a card game company get such great results from their emails?

The easy answer would be that their emails, like their game, are hilarious. But there are many companies that send funny emails. And I’m willing to bet most of them have never even sniffed a 20.3% click rate (by the way, that was somehow down from their average click rate of 21.4%).

There’s something at work that’s much more than just humor to make Cards Against Humanity’s emails so effective.

Let’s take a look at exactly what it is so you can start applying it to your own emails (even if your emails aren’t remotely funny).

If you’ve ever played Cards Against Humanity, one realization probably hit you within the first minute:

This game is not for everyone.

It’s rude, offensive, and full of words that will make you want to hide the box whenever your parents are visiting.

For those reasons, many people don’t like playing it.

But for every person who doesn’t like playing it, there’s a person who loves it so much she can’t help but spread its profane Gospel to her entire circle of friends.

That’s probably why Cards Against Humanity currently occupies the #1, #2, and #6 spots in Amazon’s Toys and Games category: Well guess what? Their emails are exactly the same way—created exclusively for their biggest fans. With every email, they shoot for the moon, even if it looks like they’re not trying. I inserted the smiling poop emojis so no one would be offended by a certain word in this image from a Cards Against Humanity holiday promotion.

That image is from one of CAH’s first holiday promotional emails, where they offered 12 mystery gifts to the first 100,000 people to give them $12.

The only place they promoted it was their email list. With one email. It began like this:

The holiday season is upon us, and it’s time for us to do a crazy stunt in a desperate bid for your attention and money.”

Who are you writing your emails to? Why did they decide to buy something from you? What makes your best customers love your product? What feelings does it give them?

The answers to these questions will help you create emails they actually want to read, regardless of whether you could ever get away with being as shocking as Cards Against Humanity.

It’s not about shock—it’s about connection.

At the time that MailChimp post was written, Cards Against Humanity had sent only 15 emails in three years. According to founder Max Temkin, that low frequency is for a very specific reason (and no, it’s not because they’re lazy):

“Sending an email is one of the worst things you can do to a person,” he said.

“You are stealing a little part of their life away. 99.99% of all emails are incredibly annoying and a huge imposition. If your job is to write emails, you should always be fighting to send fewer things and make sure each email you send is so incredible that it’s a rare treat to hear from you.”

The emphasis added to the end of that quote is my own.

This does not mean you should only send 15 emails per three-year period. But here’s what it does mean:

And, perhaps most importantly, your emails should always seek to give. As Max put it:

“Every email rewards people for giving us their time and attention—we give them something new, something free, something funny, etc.”

Let this be the litmus test for every customer email you write: Is this giving the customer something of value? Is it rewarding them in some way?

That doesn’t mean you literally have to be giving something away. After all, the CAH email in the example was a sales email. The point is, it was letting customers know about something that the CAH team knew would delight them.

Over time, many businesses fall into a routine of sending customers occasional dull updates and company news items rather than emails that give them some type of exciting or valuable action to take.

Just last week, in fact, I got an email from a small WordPress development company letting me know they have a new logo. There was absolutely nothing for me to do other than stare at what, to them, is a glorious new representation of their company.

To me, it was just another logo. The only action I could take was clicking “Unsubscribe.”

CAH is careful to not only give customers an action to take, but to also make sure it’s something new:

“Another thing we think about it is that we try to make every email actionable,” Max told MailChimp. “There’s a new thing you can do having read it that you couldn’t have done with a previous email.”

Most likely, the emails you’re sending right now give your customers something to do, whether it’s:

If the answer is no, you should do at least one of two things:

When you take on the mindset of, “My emails will give my customers something that enables them to do things they’ve never been able to do before,” your emails will transform.

Will Hoekenga is a copywriting consultant and creator of frameworks that help businesses write better copy, like the Home Page Copy Generator. He writes at Copygrad.com.

Will Hoekenga
Will Hoekenga is a copywriting consultant and creator of frameworks that help businesses write better copy, like the Home Page Copy Generator. He writes at Copygrad.com. 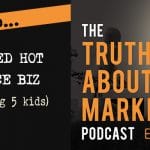