[Story Sells] How Bush beats Obama in your sales stories 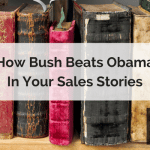 I loved watching SNL as a kid. My favorite player? Dana Carvey.

And, of course, the fake George Herbert Walker Bush.

Carvey’s impression of President Bush became so widespread, that the former president himself once did a version of it on live TV.

One reason Dana Carvey’s impression was so loveable …

After Dana did his impression, everyone could impersonate George Bush.

Contrast this with the Obama impression brought to us by the mind-boggling talent of the (former) SNL cast member Jay Pharoah.

Pharaoh does incredible life-like impressions of Denzel Washington, Will Smith … and President Obama.

Pharoah’s talent is amazing. I watch him in awe.

But because there’s no way I could ever match his ability, I’m left outside. I’m not part of the show. Just a spectator.

Carvey’s impression, however, allows me to join in on the fun.

He took the mannerisms of the real George Bush, harvested a few key details, and then stretched those details to an absurd extreme.

But each of those details – the phrases, the hand gestures – were specific and distinct and could be copied by anyone. In part because they were so extreme.

Perhaps that’s why Carvey’s impression of Bush became the standard.

You can aim for the same in your sales stories. Tell the story that can easily be retold to others by picking out the key details and dramatizing them for effect.

Once that narrative is established, it becomes very hard to change.

My favorite modern example is the Paleo narrative.

The logic of this story is simple: Cavemen evolved to exist in very specific ways (especially the food they ate), so if we want to be healthy, we must duplicate those same ways.

Yeah, this story can be stretched to extremes a little too crazy – I’ve been told to never return to Whole Foods on account of that incident with my spear and the ground round – but it does makes surface sense. And it’s very easy to retell.

So, once you find a narrative that fits the facts, you’ll be welcome in your customer’s mind.

Well, it’s not about how brilliant and insightful your story is.

It’s about how tell-able it is.

Dana’s Bush impression spread because everyone could do it.

Everyone can tell the paleo story to their spouse or friends.

(Whether you tell the story with wide-eyed conviction or eye-rolling condescension, the story still gets told.)

Note that this kind of story works especially well for explaining how something works. Could be the mechanism of your product, could be the general problem it solves, could be the history of the industry.

As an example, google the classic ads for Schlitz beer by the godfather of copywriting, Claude Hopkins.

Hopkins tells the story of how Schlitz beer is the pure because of how it is filtered. As it turns out, pretty much every beermaker did the same thing. But Schlitz came to own the story, because they were the first to tell it so clearly.

So how do you do copy Dana Carvey and tell a spreadable story? 3 simple steps:

2. Pick out the essentials.

3. Dramatize and emphasize those elements.

The MORAL: ‘Impersonate’ Dana Carvey and tell the story that’s easy for everyone else to tell.